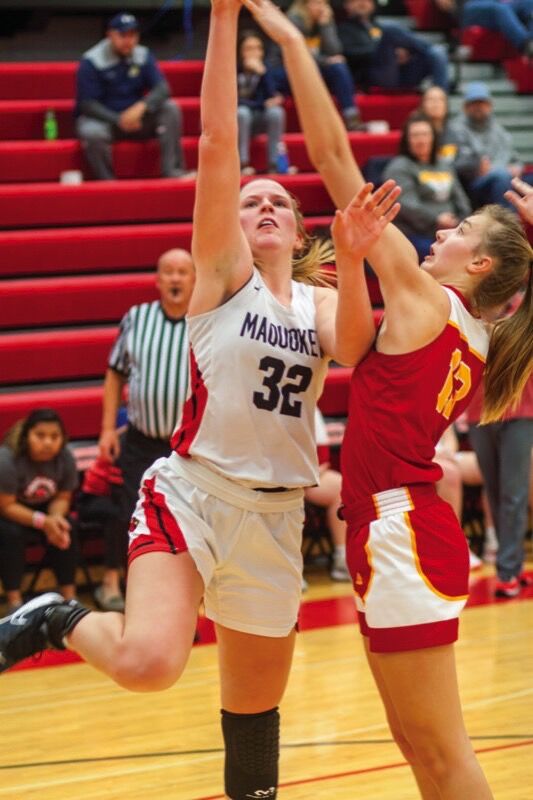 Maquoketa’s Jackie Miller gets inside position against a smaller Marion defender. Miller scored a team-high 16 points Dec. 21 in Maquoketa. 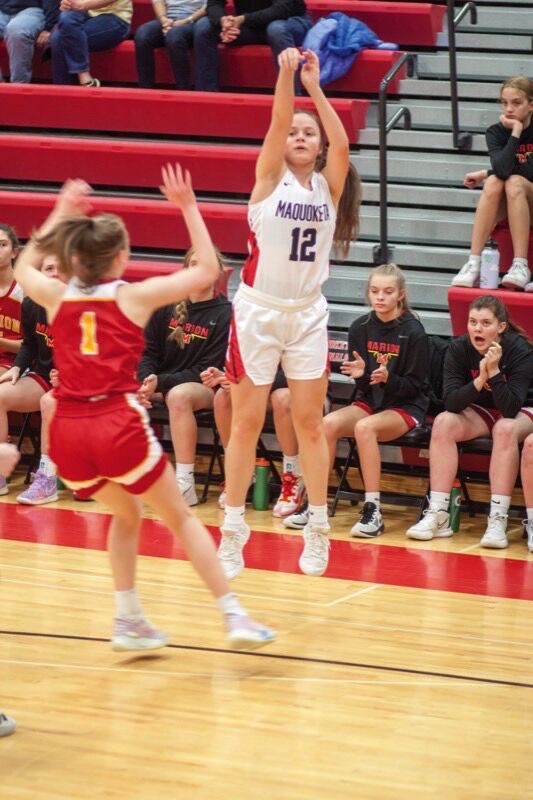 Maquoketa’s Jackie Miller gets inside position against a smaller Marion defender. Miller scored a team-high 16 points Dec. 21 in Maquoketa.

The Maquoketa Cardinals girls basketball team fell to 3-6 after the Marion Wolves came back using the three-point line to their advantage Dec. 21.

The Cardinals got off to a quick start against Marion by scoring the first seven points of the game. After one quarter the Cardinals led 14-10.

That’s when the Wolves took over. With 4:52 left in the third quarter, the Wolves extended their lead 32-23.

In the last 16 meetings between the two schools, the Cardinals have won only 2 times while losing 14.

A couple of glaring stats for the game: the Cardinals committed 24 fouls which led to Marion shooting 34 free throws and connecting for 19. The Cardinals went to the line only 13 times and made five free throws. The Wolves were whistled for 17 fouls. The Cardinals made three three-point baskets while the Wolves made seven.

The twin towers of Jackie Miller and Carley Davis led the Cardinals in scoring, as Miller had 16 points and Davis chipped in with 12. Tenley Cavanagh had eight assists while Reese Kuhlman recorded four steals.

The Easton Valley River Hawks girls basketball team ended December on a sour note as conference foe Prince of Peace handed them a 78-69 loss. The 2-8 River Hawks will use the extended break to try to turn their season around.

For the first time this season, the River Hawks had four girls score in double figures: Renee Hartung 15, Kaitlyn Kuhl 14, Josie Wood 13, and Jaysie Wood 12. Kuhl recorded a double-double as she pulled down a team-high 17 rebounds. Right behind Kuhl was Emmah Johnson with 15 rebounds. Hartung came close to recording double figures in rebounds by pulling down 9.

The River Hawks open the second half of the season on the road at Lisbon Friday, Jan. 7.

Arizona football insider: 15 insights and tidbits about the new-look Wildcats

How Motivated is Aaron Rodgers to Snap 0-3 Playoff Record Against San Francisco?

The Maquoketa Cardinals boys basketball team fell to 3-5 after travelling to Marion Dec. 21 and losing 63-55.

Again, the third quarter seemed to be the difference as the Cardinals scored only four points in that quarter, putting them in hole that was just to big to dig out of.

The Cards tried to fight back in the fourth quarter, outscoring the Wolves 22-18, but came up eight points short.

The Cardinals start the new year on the road at Mount Vernon on Tuesday, Jan. 4. Then, West Delaware comes to Maquoketa Friday, Jan. 7.

Stats not available at press time.

The Class 1A No. 3-ranked Easton Valley River Hawks had just one game on its schedule last week leading into the holiday break. They defeated Prince of Peace 75-33.

Easton Valley opens the second half of the season on the road against Lisbon at 7 p.m. Jan. 7.

Stats not available at press time.

U Of I Cancer Center

Partly cloudy skies during the morning hours will become overcast in the afternoon. A few flurries or snow showers possible. High 23F. Winds W at 15 to 25 mph.