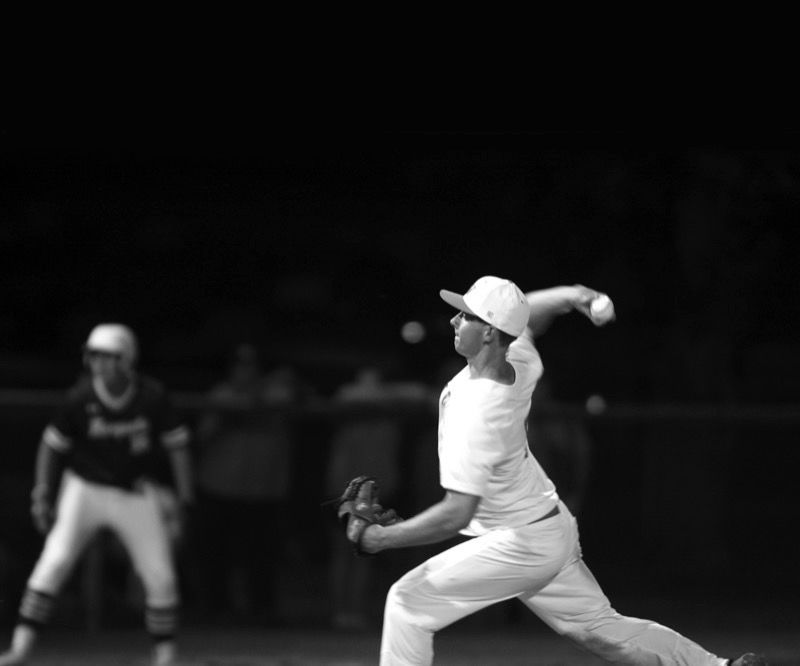 Austin Franzen delivers a pitch toward home in the River Hawk’s first-round postseason win last week in Miles against Marquette. 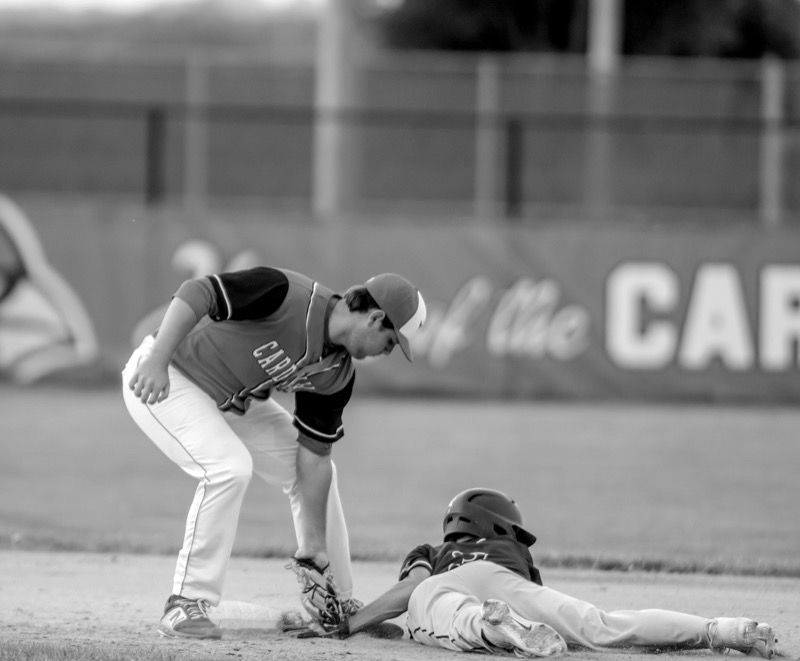 non-conference game with the Tipton Tigers.

Austin Franzen delivers a pitch toward home in the River Hawk’s first-round postseason win last week in Miles against Marquette.

non-conference game with the Tipton Tigers.

Not even the weather could beat the River Hawks so far this season as the River Hawks and the Marquette Catholic Mohawks waited out rain and lighting for one hour and 45 minutes before the first pitch was delivered.

“They were prepared to wait it out as long as it took to get the game in Saturday instead of playing Monday then the winner turning around and playing Tuesday,” said EV Head Coach Derek Erwin.

But once the game started, the River Hawks jumped on the Mohawks early. Lead-off hitter Carson Fuegen drew a walk, Brig Bormann connected for one of his three singles, and Conor Gruver walked (the first of four on the night) to load the bases.

With the score 3-0, Ashten Huling up to bat and Franzen on third, Erwin employed the suicide squeeze. The pitch was low and outside, allowing Franzen to steal home.

“I thought it was the right time to squeeze,” Erwin said. “We were up by a few runs and I wanted to keep the pressure on the Mohawks and get my team fired up.”

The River Hawks scored five times in the first inning, knocking out Mohawks starting pitcher Christian Prull before the inning was over.

With the River Hawks up 11-0 in the top of the fifth, Coach Erwin brought in relief pitcher Nate Trenkamp, but the Mohawks roughed up Trenkamp for three runs on back-to-back doubles and a couple of hits. The River Hawks put the game in the W column with two outs in the sixth inning as Huling hit a single up the middle to score two runs and to secure a victory after the rain delay.

“13-0 record is by far the best record since the school name change to Easton Valley to start a season,” Erwin said.

The River Hawks were scheduled to play the Calamus-Wheatland Warriors Tuesday at 7 p.m. in Miles. The Warriors beat Springville 3-0 in Miles to earn the right to play Tuesday. The winner in the Easton Valley-Calamus-Wheatland game will travel to Alburnett on Saturday.

After dropping the first game in Clinton against the No. 1-ranked team in Class 3A, the Cardinals came back with four runs in the top of the fourth inning to take a 5-3 lead. The Cards tacked on an insurance run in the seventh as Cardinals hurler Payton Mangler shut down the Sabers for the victory

On July 7, the Tipton Tigers came to town and got on the board first, scoring three runs in the first inning.

The Cardinals tallied single runs in the first, third, fourth, and fifth innings to take a 4-3 lead. They found some breathing room in the sixth as they pushed four runs across the plate to take an 8-4 lead to the top of the seventh.

Jack Dostal relieved Aunan in the seventh. The Tigers gave Cardinals fans some anxious moments in the seventh after scoring two runs and leaving a runner at second and third base with two outs before Dostal fanned the last Tipton batter to secure the victory.

After dropping the first game in Marion, the Cardinals again came from behind in the second game to pull out a tough 11-9 win.

Marion put up a seven spot in the second inning making a tough hill to climb for the Cardinals. But the Cardinals put up four runs in the fourth to close the gap to 7-5.

Dostal knocked in Harmon with a single to take the lead.

Marion scored a run in the bottom of the seventh to force extra innings where the Cardinals finally won the game in the eighth inning. Mitchell Roeder walked, Manning and Kannon Coakley both singled, then Roeder and Manning scored as the Cardinals won 11-9.

The Maquoketa Cardinals softball team picked up its first sweep of the season 3-0 and 12-0 on July 6 at home against South Tama.

Cardinal starting pitcher Jenna Wiebenga limited the Trojans to just four hits — three of them singles. Wiebenga struck out five and walked one en route to her second win of the season.

Tenley’s sister, Carley Cavanagh, pitched game two against South Tama. Carley, an eighth-grader, limited the Trojans to just one single in four innings for the second complete game shutout on the night for the Cardinals. Carley struck out four hitters.

She received plenty of support as the Cardinals racked up 14 hits and the defense did not have any errors. Bowman went 3x3 with 2 RBI; Hackman, T. Cavanagh, C. Cavanagh, and Laney Hafner all had two hits in the nightcap. Those two wins are what the Cardinals needed to head into postseason play with more confidence.

The Cardinals were supposed to play Beckman Catholic on July 8 but the game was cancelled.

The Cardinals open postseason at 7 p.m. Thursday in a Class 4A Region 8 quarterfinal at Central DeWitt.

The River Hawks softball team appeared at full strength for the first time this season.

Senior Calli Beck pitched for the first time this season. She was a little rusty as she walked five batters, hit a player with a pitch, and gave up six hits with no strikeouts. The defense added to the troubles by committing five errors in the contest.

The River Hawks mustered only three hits off the Midland Eagle’s pitcher, with EV junior catcher Zoe Espirdon collecting two hits — a single and a double. Shortstop Sydney McNeil had the other hit, which was a double.

Being at full strength, the Easton Valley River Hawks are looking to do some damage in postseason play as the River Hawks (0-7) traveled to Springville (9-7) in the Class 1A Region 8 first-round game Monday July 13.

Stats from the week of June 29

Scattered thunderstorms in the morning, with mostly cloudy skies late. High 87F. Winds S at 10 to 20 mph. Chance of rain 50%.

Sorry, there are no recent results for popular images.