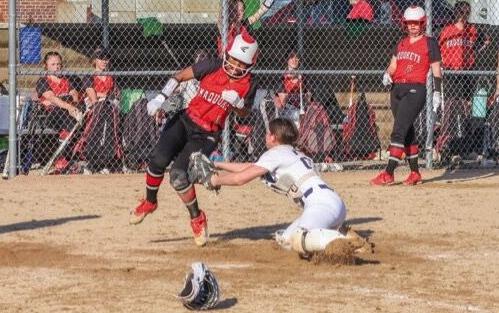 The Cardinals’ Kasedi Frazier is tagged out at home plate while trying to score from a base hit in the Cardinals vs. Cascade game June 7. 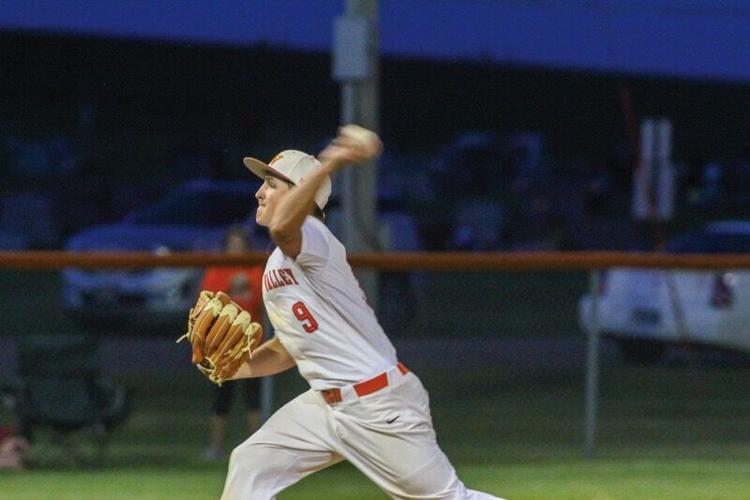 River Hawks relief pitcher Ayden Huling gets the final three out in the seventh inning preserving the victory over Lisbon in Miles.

The Cardinals’ Kasedi Frazier is tagged out at home plate while trying to score from a base hit in the Cardinals vs. Cascade game June 7.

River Hawks relief pitcher Ayden Huling gets the final three out in the seventh inning preserving the victory over Lisbon in Miles.

Kalyn Hackman got the Cardinals’ week off on a positive note as she led off the game against Cascade and hit her first career home run to center field, giving the Cardinals an early 1-0 lead. Coach Lance Richardson put Malisha Robert in right field after Taylor Bates injured her foot. Robert took advantage of the playing time and smacked a two-run home run to left center. Hackman, Robert, and Mikaela Burken each collected two RBI for the game.

In game two, the Cardinals recorded 12 hits but could only push one run across the plate. The tough-luck loser in the circle was Skyler Burkey. Burkey pitched all seven innings and gave up six hits and three runs; two of those runs were unearned. Burkey struck out four and walked four. The Cougers broke a 1-1 tie in the bottom of the sixth on two Cardinal errors, a sacrifice and a hit scoring two unearned runs.

Then, on Saturday at the Calamus-Wheatland tournament, Burkey pitched three innings of no hit softball in the Cardinals’ 14-0 win to start the day. Jenna Wiebenga was the hitting star going 6x10 with a home run — the ninth of her career — along with three doubles and eight RBI for the day.

Tenley Cavanagh recorded three hits including a triple, double, and four RBI. Kasedi Frazier had four hits on the day.

The Cardinals struck out as a team only seven times combined in all three games and committed zero defensive errors in the three games. All three of the Cardinals’ pitchers picked-up victories: Burkey allowed no hits in a  shortened game; Wiebenga tossed nine innings; and Carley Cavanagh pitched well in the championship game.

This week the girls hosted Independence on Monday. Then on Wednesday, June 15, the Cardinals travel to Benton Community for a doubleheader. Maquoketa finishes the week Thursday at Maquoketa with West Delaware coming to town.

The Cardinals baseball team had an unusual week last week.

On Monday, the Cardinals got washed out in Vinton; these games will not be made-up.

The Cardinals were able to play Friday night, June 10, in Maquoketa as the Central DeWitt Sabers came to town.

After giving up those four runs in the first, the Cardinals’ pitcher, Owen Powers, kept the Sabers off balance for the bulk of the game. In the top of the seventh, Brandon Skladzien relieved Powers, and the Sabers doubled their runs in the inning.

In game two, sophomore Dylan Mangler took the hill for the Cardinals. Kyle Bixby took the mound for the Sabers and provided the only offensive run for his team.

At the plate, Bixby led off the second inning with a double. The next batter, Mitchel Maher, ripped a double to right center that scored Bixby. The Sabers won game two 1-0 in a pitcher’s duel.

Caide Steffen recorded the only hit for the Cardinals, and Mangler got on base by drawing a walk.

Next week, the Cardinals host Independence on Monday June 13, and on Wednesday June 15, the Cardinals travel to Eldridge to take on North Scott in a non-conference contest. To close out the week, Maquoketa travel to Benton Community for a doubleheader Thursday.  Results for those games will be in the June 22 edition of the Sentinel-Press.

The River Hawks went 2-1 last week after beating Springville 10-0 and splitting a doubleheader with Lisbon June 9.

To start off the week, the River Hawks beat the winless Springville Orioles 10-0.

Offensive stars in the game were Conor Gruver, and Ayden Huling both going 3-4. Luke Reuter went 2x2, with two RBI and three stolen bases. The River Hawks pounded out 10 hits and stole eight bases in the win.

In a more challenging matchup, the Lisbon Lions, ranked sixth in class 1A in the latest Iowa high school boys baseball poll with a 10-1 record, turned the tables on the River Hawks, shutting them out 7-0 in the first game of the doubleheader.

The score was 1-0 Lisbon going to the top of the sixth, but an error and five-straight singles extended the Lions’ lead to 6-0.

In game two the River Hawks hung on in the seventh inning to win in a slugfest, 17-12, to earn a split in the doubleheader

In the second game, winning pitcher Conor Gruver was also the top hitter for the River Hawks. He was 3x3 at the plate with a double, four runs, three RBI, two walks, and one stolen base. The River Hawks banged out 17 hits. Ashten Huling and Hayden Felkey also recorded three hits and had four RBI apiece. Every batter in the River Hawk lineup had at least one hit or scored a run. The first four hitters in the lineup combined for 10 hits and scored 12 runs to pace the River Hawks.

This week the River Hawks traveled to Edgewood-Colesburg Monday, June 13, for one game. Then on Thursday, June 16, Marquette Catholic comes to Miles for a doubleheader starting at 5 p.m. Then on Friday, Monticello travels to Miller Field in Miles for a non-conference game starting at 7 p.m.