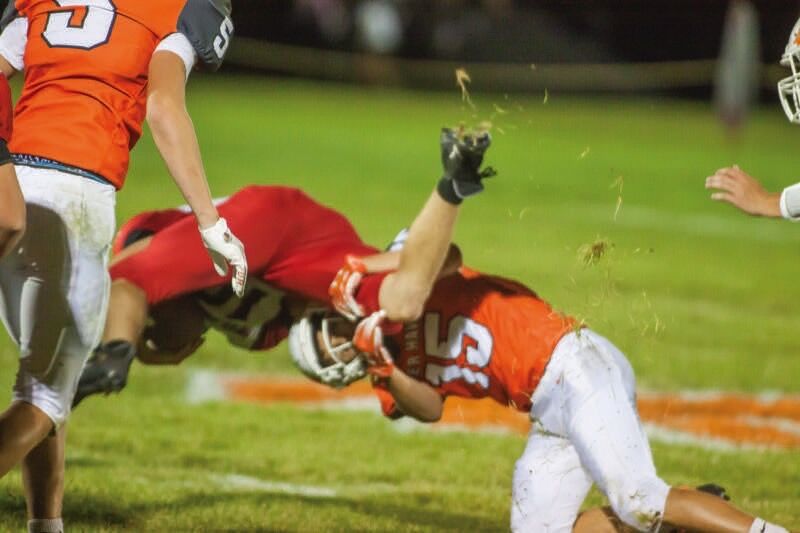 Sophomore Ayden Huling makes a solo tackle at the line of scrimmage against a Central City running back. Huling recorded two solo tackles and 5 overall tackles for the game in Preston Sept. 4. 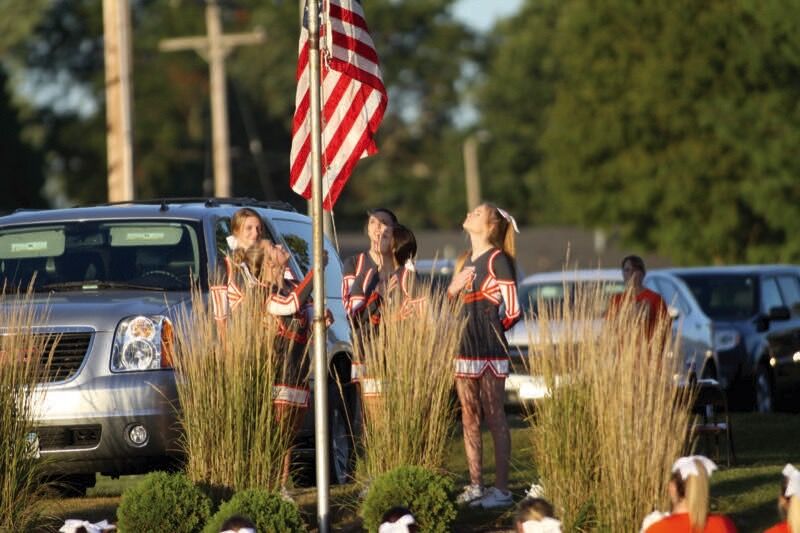 Easton Valley cheerleaders raise the flag for the national anthem before the football game Friday night in Preston.

Sophomore Ayden Huling makes a solo tackle at the line of scrimmage against a Central City running back. Huling recorded two solo tackles and 5 overall tackles for the game in Preston Sept. 4.

Easton Valley cheerleaders raise the flag for the national anthem before the football game Friday night in Preston.

The Easton Valley River Hawks football team ran away from Central City Friday night in Preston, winning 85-0 to run their record to 2-0 on the season.

The River Hawks rushed for 261 yards while holding the Central City Wildcats to a 5-yard loss on the night.

Kolton Murphy led the River Hawks in rushing with 192 yards. Murphy played only two-and-a-half quarters as coach Tony Johnson pulled out most of his starters midway in the third quarter. Murphy ran for five touchdowns; his longest TD run was 65 yards in the second quarter. He also had scoring runs of 50, 36, 5, and 3 yards for the night.

“I ran harder this week than I did in the first week,” Murphy said. “The first week I was a little timid and afraid, but tonight I saw the holes and ran hard, and if someone got in my way, I tried to run over them.”

The River Hawks put the ball in the air only seven times and the quarterbacks completed all seven passes, with Conor Gruver going 5/5 for 64 yards and three touchdowns and Ashten Huling going 2/2 for 29 yards and one touchdown.

The EV defense was just as good as the offense Friday, limiting the Wildcats to just 18 total yards. The Wildcats achieved their first first down with 10 minutes left in the fourth quarter.

Andin Farrell led the team in tackles with 10. Daken Kramer chipped in with 6.5 tackles. As a team the River Hawks recorded 59.5 tackles as the Wildcats came away with only 18 tackles as a team.

The River Hawks did record six penalties — one for holding, one for a false start, and four times the kickoff went out of bounds. Coach Johnson said he used a hurry-up offense against the Wildcats because the coaching staff thought it would confuse the opponent and keep them off balance.

The River Hawks take their Class 8 No. 8 ranking and 2-0 record on the road to play the Lansing Kee Hawks at 7 p.m. Friday. The Hawks also are 2-0 on the season.

In other football news: The Maquoketa Cardinals sat out the team’s second game of the season Sept. 4. A Cardinal varsity player tested positive for COVID-19 one week earlier, and as a precaution, the Cardinals canceled their Aug. 28 and Sept. 4 football games.

Even with a football season, Badgers facing revenue shortfall of up to $70 million

The River Hawks lost 3-0 but gave the Vikings a good match, according to head coach Denise Larson.

“I thought the girls played hard and did a better job in the back row with digs and getting to some ball that we did not get to Saturday when we played in our tournament,” Larson said. “We struggled with our serves tonight. We have to keep our serve success around 90% and tonight we were down to 85%.”

Kaitlyn Kuhl led the River Hawks in kills with 7. She also recorded 8 digs and was 10 for 12 in serves. Mikayla Mitchell finished with 4 kills and Dana Carlson had 3. Paige Thines had a team-high 16 digs. Maddi Klemme finished with 3 blocks. Klemme and Kylee Ready were 100% on serves. Klemme was 6-6 and Ready went 9-9.

Bellevue hosted its annual twilight meet with the four high schools in Jackson County Bellevue, Marquette Catholic, Maquoketa and Easton Valley Sept. 1. No team scores were kept, only the top 10 finishers in both boys’ and girls’ competitions.