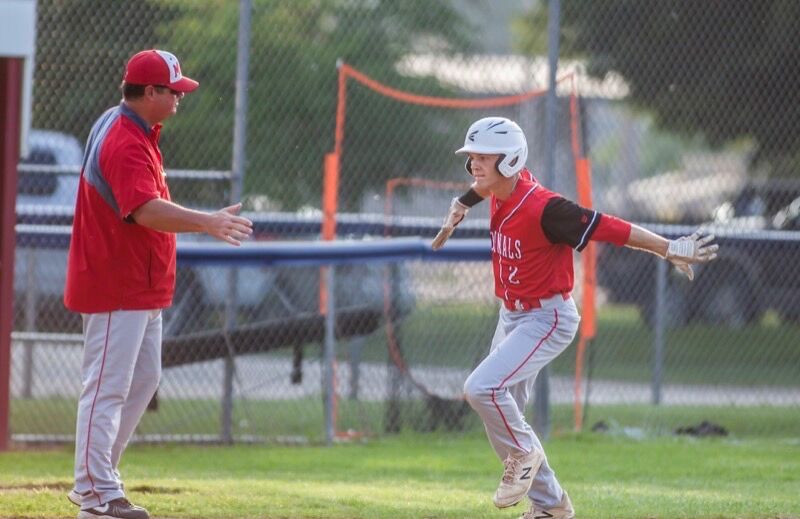 Cards coach Ray Cavanagh greets Daniel Coyle as he rounds third base after Coyle smashed his first career home run — a three-run shot in the first inning against Decorah, propelling the Cards to victory in first-round district action July 16. 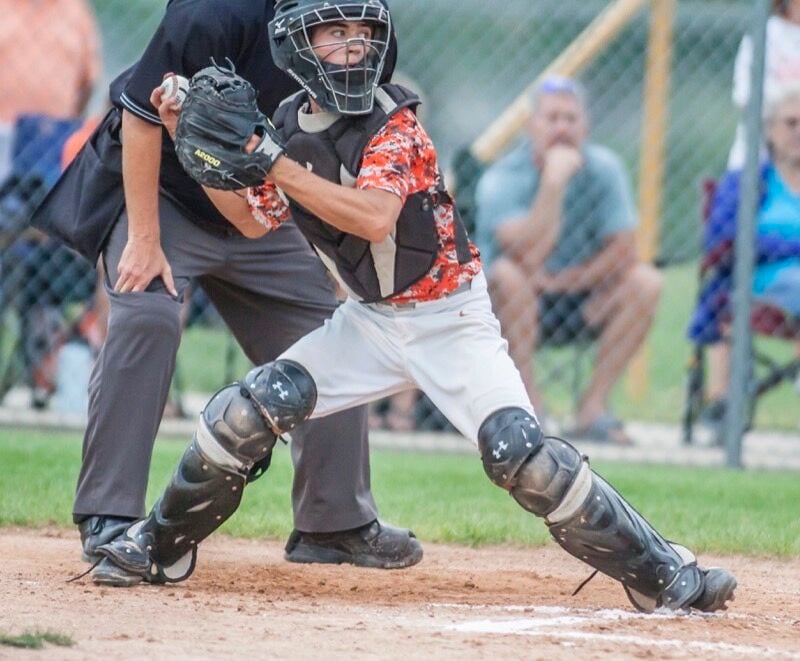 River Hawks catcher Brig Bormann gets set to deliver a throw to second base to cut down a base runner trying to steal second during second-round playoff action at Maquoketa Valley. 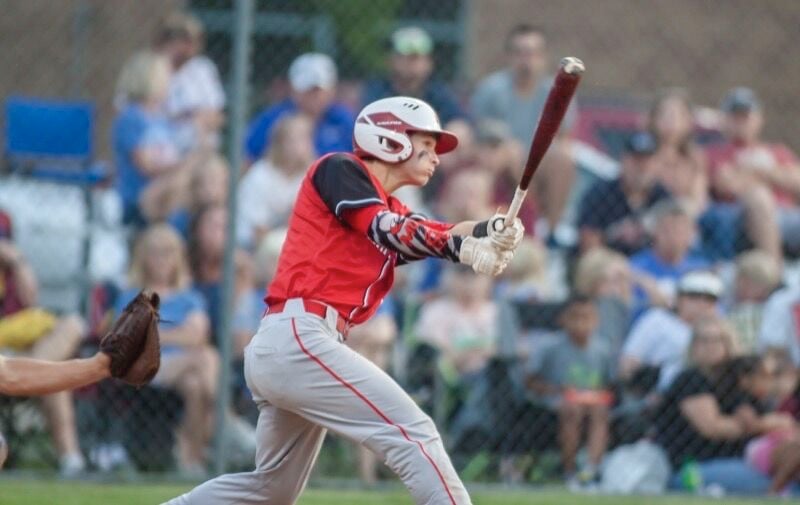 Cardinal Hunter Manning watches the ball fly off his bat as he completes his follow through. Manning hit a double for the 101st hit of his career, helping Maquoketa to victory at Decorah last Friday. 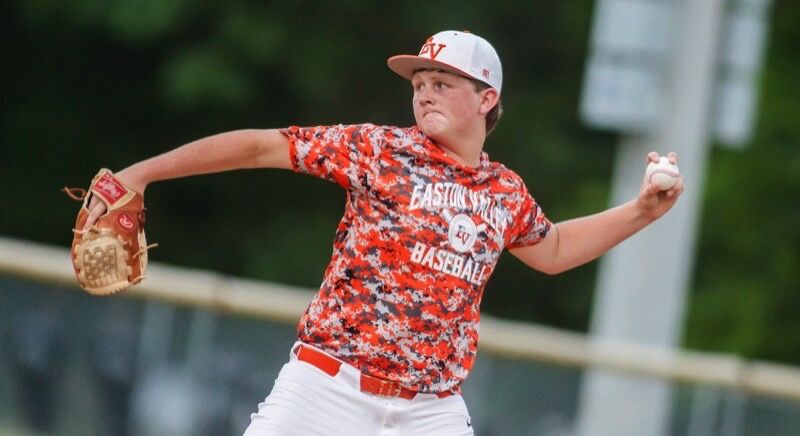 Cards coach Ray Cavanagh greets Daniel Coyle as he rounds third base after Coyle smashed his first career home run — a three-run shot in the first inning against Decorah, propelling the Cards to victory in first-round district action July 16.

River Hawks catcher Brig Bormann gets set to deliver a throw to second base to cut down a base runner trying to steal second during second-round playoff action at Maquoketa Valley.

Cardinal Hunter Manning watches the ball fly off his bat as he completes his follow through. Manning hit a double for the 101st hit of his career, helping Maquoketa to victory at Decorah last Friday.

The Maquoketa Cardinals profited early from a Decorah Vikings gamble on the pitcher’s mound and advanced into the playoffs.

The Maquoketa Cardinals traveled to Decorah Friday night for first round Class 3A substate region 3 contest and won 10-3. The win sent them to Dubuque to play Dubuque Wahlert Monday, July 19.

Vikings pitcher Keenan Tyler had only pitched one inning this season, throwing 24 pitches and giving up two hits and one run all season.

In the top of the first, lead-off hitter junior Hunter Manning jumped on the pitcher right away, singling to start the game. That single was the 100th hit of Manning’s high school career; he now has 102. His has recorded 77 singles, 21 doubles, 4 triples, becoming the 20th player in school history to accomplish this feat.

Kasey Coakley hit a fly out to left. Kannon Coakley was safe on an infield single, sending Manning to third and letting Kasey Coakley steal second.

Payton Mangler reached on an error by the shortstop, scoring Manning for the Cardinals’ first run. Payton Schueller then ran for Mangler and stole second.

After a strikeout by Kaleb Whaley, Daniel Coyle gave the Cardinals a big lift by hitting a 2-2 pitch for a three-run homer to left with two outs, giving the Cardinals an early 4-0 lead. The home run was Coyle’s first career home run at any playing level.

In the top of the second, Mitchell Roeder led off with an infield single and stole second; Tai Streets took over running duties for him. Caide Steffen struck out, then Manning doubled off the fence in left.

The Vikings changed pitchers to start the third inning, and the Cardinals went down in order.

The Vikings intentionally walked Kannon Coakley to load the bases. Mangler hit a deep fly to center. Manning tagged and scored, giving the Cards a 9-0 lead going into the bottom of the fourth.

Roeder replaced Mangler on the hill in the bottom of the sixth. He walked the first batter, then the next got a hit to left. Roeder walked the next two batters, giving the Vikings their first run.

After a sacrifice fly scoring another run, Roeder walked the next batter to reload the bases. Mangler came back in to pitch, then an infield ground out scored the Vikings’ third run of the game. The next batter ground out to short for the third out.

The Cardinals scored their final run of the game after Mangler struck out; however, the pitch got away from the catcher and Mangler was safe at first.

Sean Swanson drove a shot off the top of the centerfield fence, scoring Schueller (who ran for Mangler) and giving the Cards their 10th run of the game.

Mangler outed the Vikings in order in the bottom of the seventh, giving the Cards a 10-3 victory.

The Word with Garrett Snodgrass: How the family business drives the York native in football

River Hawks made base but could not convert to score

The Easton Valley River Hawks season came to an early end at the hands of the Maquoketa Valley Wildcats 3-0.

Ashten Huling got the first hit for the River Hawks leading off the top of the third; then Hayden Felkey and Ayden Huling struck out. Lead-off hitter Brig Bormann grounded to the pitcher to end the inning.

Austin Franzen doubled after the first two River Hawks were retired. He went to third on a wild pitch, but a foul-out foul ball hit by Conor Gruver ended the inning, stranding Franzen on third.

Gruver relieved Ivan Lent at the mound in the bottom of the fourth. The River Hawks’ pitchers — both Lent and C. Gruver — had 0-2 counts on the two hitters before putting both runners on base with a hit by pitch.

In the top of the fifth, Ashten Huling reached first base after an infield single to third with two outs. A wild pitch allowed him to reach second base, but the River Hawks could not get the timely hit when they needed it, as Ayden Huling grounded out to third to end the inning.

The top of the sixth was the River Hawks’ best scoring opportunity as Bormann reached second base on an error by the third baseman. A. Gruver grounded to second for the first out and Bormann advanced to third.

Carson Fuegen and Austin Franzen walked, loading the bases with one out. But C. Gruver and Porter Fuegen struck out, ending the scoring threat.

In the top of the seventh, Ashten Huling reached first on an infield single down the third-base line. Felkey struck out, then Huling advanced to second on a wild pitch. Ayden Huling hit a foul fly to third for the second out.

Bormann, the next hitter, walked. With A. Gruver at bat and a 3-2 count, Ashten Huling got picked off second base to end the game and the River Hawks’ season.