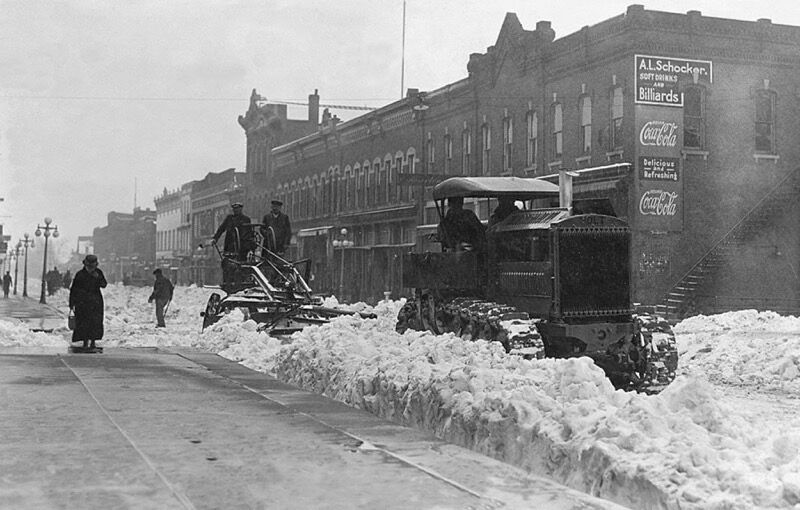 Crews worked by hand to remove snow in from the roads in downtown Maquoketa in this photo circa 1930. 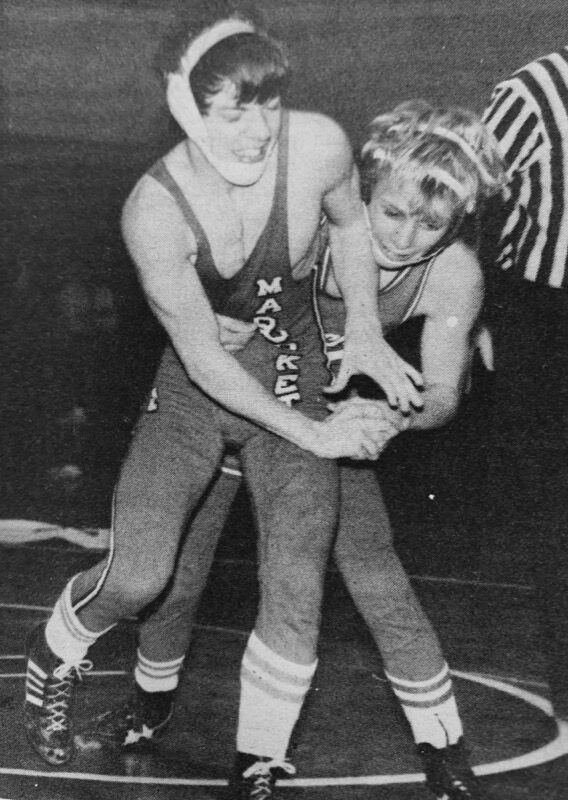 Maquoketa 98-pounder Dean Kloft strains to escape from Camanche’s Doug Stahl during a wrestling match in Maquoketa in 1981. Kloft got the first-period escape but eventually lost the match 12-9.

Crews worked by hand to remove snow in from the roads in downtown Maquoketa in this photo circa 1930.

Maquoketa 98-pounder Dean Kloft strains to escape from Camanche’s Doug Stahl during a wrestling match in Maquoketa in 1981. Kloft got the first-period escape but eventually lost the match 12-9.

The Jackson County Regional Health Center Board of Trustees re-elected the same slate of officers for the seventh consecutive year.

Gas price update: This past week prices were 42.1 cents per gallon higher than one year ago.

Maquoketans hosted several foreign exchange students and other visitors from abroad last year. Among them were Roberta and Joanna Cheng family from Panama. Their son, Kevin, lived with the Duane Stickley family.

Some 46 boys of Maquoketa Boy Scout Pack 238 qualified for Fun Night, held at the YMCA in Clinton, by selling $200 of popcorn.

Members of the “Radio Rowdies” team weighed in at Mitchell Maskrey Feed Store, which was one of the Maquoketa official weigh-in sites for the Shape-Up Jackson County program.

Smoke detectors have been a godsend in reducing fire deaths. Last year only 36 people perished in fires, the lowest number since the state began keeping track of fire deaths in 1912.

Class: Be A Better Shopper. Learn to be a better shopper by comparing food labels, checking unit prices, utilizing shopping lists and many other tips. Instructor: Sara Hankemeier; Maquoketa Community Center. No charge.

Tyler Breuch was the 1981 New Year’s baby. He joins a brother, Peter, age 9. Tyler’s father is a Maquoketa attorney.

No one who ever knew Dorothy Hovey will ever forget what a great person she was. Her “Smoking is Very Glamorous” poster graced her bulletin board and reminded her that she should quit entirely.

Settlement of the compensation to the widow of the late Bellevue Police Chief Earl Berendes, slain April 17, 1969, when he surprised thieves who had broken into the Achen Chevrolet Garage in Bellevue, has been reached. The Bellevue City Council has heard the results of their settlement at their December meeting.  Attorney E. E. Stamp representing the city in a case, which was pending in District Court, said Mrs. Berendes had agreed to accept $13,000 as compensation in the death of her husband while he was on police duty.

Plans are in progress for the Oxford Junction centennial to be held July 2-4, 1971.

Donations are requested for Warren Koch, 19-year-old son of Mr. and Mrs. Wilbur (Phyllis) Koch of rural Miles. A Warren Koch Day is being held to raise money for the youth, who was injured in a one-car accident May 16, 1970, near Miles.

Plans to reopen the Maquoketa Youth Center Feb. 2 and to launch a campaign for financing construction of youth recreation building have been announced by Randall Zirkelbach, president of the Maquoketa Youth Recreation Board. Dwight Zimmerman has been hired as youth center director.

The Oxford Junction Consolidated High School very likely will be removed from the state department instructions approved list at the end of the 1962-63 term, it was disclosed.

Jackson County’s three supervisors were paid at total of $15,338.14 in 1959, according to the annual financial report. Under Iowa law, each supervisor is salaried at $12.50 per day with 7 cents per mile allowed. Each member serves a three-year term, is chosen by popular vote, and posts a $5,000 bond.

The fact that Ansel Briggs, Iowa’s first governor, hailed from Jackson County is no doubt quite well known. However, lesser-known facts and occurrences of his colorful life and of the fame he brought to this area. Briggs was 30 when he came to Iowa for the first time. He was born in Vermont in 1806. He lived there until he was 24 years old and received his early education in its common schools. Then in 1830, with his family he moved to Ohio where he first married and entered politics as a Whig. Before leaving Ohio he had remarried (his first wife died in 1947). This was the year in which Briggs became an Iowa pioneer settling in the village of Andrew.

The state Historical Society of Iowa will add the Maquoketa Community Press to its library of Iowa weeklies and dailies. The fact was disclosed when the Press received a letter from the state society. “Our newspapers are bound in durable volumes that should last for years,” it stated. “If anything should happen to your life in the future, the papers would be available.”

Mrs. Herman Nissen entertained a number of ladies at a sewing club Tuesday. Refreshments were served during the social hour.

Mr. and Mrs. F.C. Mann, Iowa City, visited over the weekend with her brother and family, the L.H. Sidwells. On Sunday they made a call to Mrs. Mann’s and Mr. Sidwells’ mother, Mrs. E.H. Sidwell, in Pasadena, California. Arrangement had been made for two telephones to be used here so three-way conversation could be enjoyed.

Canton: Fire destroyed a large barn full of hay, a corn crib and 250 bushels of corn, a 1935 Chevrolet coach, and some machinery at the Norman McGaffee farm east of Canton. Mr. McGaffee was doing chores with a lantern which was upset by a dog. Flames spread rapidly, but he quickly turned out his cattle and hogs to safety, only livestock lost were some chickens and two pups. Neighbors responded to the call for help and assisted in saving the house, which had ignited from sparks but was soon under control by a bucket brigade.

Marvin Flagel, Frank Fairbrother, Delos Romer and Lincoln Marberger left for Des Moines from where they will be sent to a training camp either in Minnesota or Louisiana. All four men were volunteers.

Sabula: It might be of interest to some of the residents of Sabula to know that Dec. 24 marks the 50th anniversary of the first train passing over the Sabula bridge. This happened shortly before noon on Dec. 24, 1880. Engine 92, pulling a flat car loaded with old railroad iron, went first, and a two-passenger train from Cedar Rapids followed.

George Sclatter, receiver of the Bank of Bellevue (Seward’s bank), placed checks in the mail yesterday for 2¼%. This is the final dividend that will be paid to depositors in the institution, which closed its doors Oct. 29, 1922. The depositors have received a total of 19¼% of the money they had on deposit when the bank closed.

LaMotte: An unwarranted run on the LaMotte bank caused that old-established institution to close its doors. We understand that false rumors of malicious nature stirred a number of the biggest depositors to withdraw their deposits without warning, and other patrons believing the institution to be insolvent rushed in and demanded their money. The LaMotte bank was an institution of dignity and a credit to the community and while it is probable that depositors will be paid in full or nearly so, it is to be regretted that suspension was necessary.

Elwood: The agriculture class spent the class periods judging draft horses. The stables of Wm. Herkelman and A. J. Wirth were visited and found to contain some very good draft horses. Another day was spent judging light horses. No better opportunity can be found for the young farmers now in school to learn to pick out a good horse than the judging and discussion of an animal by group.

John Demo, 21, and Robert White, 26, are in the county jail charged with burglary. They are held for the robbing of a clothing store at Monticello. Two new suitcases, two overcoats, three suits of clothes, five silk shirts, and mittens were stolen.

Dr. A.B. Bowen is in Des Moines at which place the presidential electors will cast their vote for Warren Harding for president of the United States. The doctor is the elector from this, the Second District. He will also attend the meeting of 39th Assembly of the legislature and see that the law makers get off with a fair start.