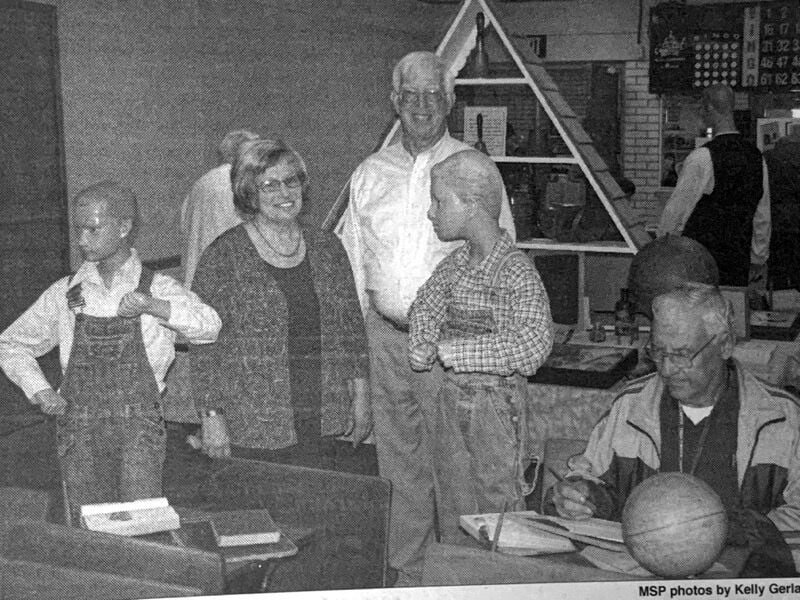 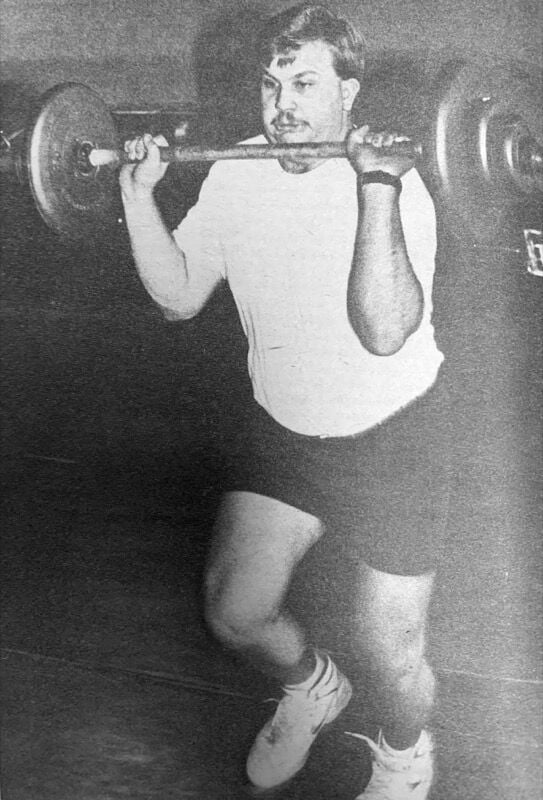 Eric Bentley grimaces as he carries 150-pound barbells during an agility test for an open Maquoketa police officer position a couple decades ago. Bentley, of DeWitt, was an intern with the department for the summer and barbells simulated the weight of the end of a stretcher holding a victim.

Eric Bentley grimaces as he carries 150-pound barbells during an agility test for an open Maquoketa police officer position a couple decades ago. Bentley, of DeWitt, was an intern with the department for the summer and barbells simulated the weight of the end of a stretcher holding a victim.

Two men robbed the Maquoketa State Bank branch in Andrew with a “small silver handgun” making off with an undisclosed amount of cash. A teller in the facility was unhurt.

A special archery-only antlerless deer hunt will be held at the Maquoketa Caves State Park beginning in October. An archery proficiency test is mandatory for all new participants. Twenty-five licenses will be sold.

Work is in progress for the Salvation Army building at its new location at Horseshoe Pond Park. A crew from Connell Supply Company put a new roof on the building.

Elaine Edwards of the Jackson County Historic Preservation Committee addressed the Jackson County Board of Supervisors to request assistance in getting a grant to survey areas of county property where American Indian burial mounds have a high probability of existing.

DAC expanded its recycling program with move to a new building. DAC will begin processing recycling materials and selling it.

City ponders racquetball club buy. The club will close Sept. 1 for economic reasons. It opened nine years ago and has been for sale for four years. Owner Dr. Paul Koob said his yearly losses have ranged from $35,000 to $15,000. If the city would run it the cost would be less as city crews could be used for maintenance.

The Lawrence Van Hook Chapter of Daughters of the American Revolution will host the District DAR meeting Sept. 10 at the United Church of Christ on East Platt Street. The District of DAR consists of 19 chapters.

The Maquoketa Community School Board selected William Urbanek as its new superintendent for the coming year. He will be paid $37,500 for that year. The school board advertised a salary range of between $36,000 and $41,000.

The Elwood Methodist church will celebrate its 125th anniversary Sept. 7.

The winter schedule for the Delmar, Charlotte, and Elwood United Methodist Churches will begin on Sept. 14. Worship services will be at Charlotte at 8 a.m.; 9:30 a.m. at Elwood and 11 a.m. in Delmar.

Miss Beverly Stout is the new home economist taking the place of Mrs. Catherine Ruth. Beverly’s uncle, Ed Stout was extension director for Dubuque and Jackson counties at one time or another.

The Board of Education of the Maquoketa Community Schools approved the plans and specifications for the proposed 80 by 80 “metal skin” addition to the junior high facilities.

Helping to make hay on the Pierce (Pete) Myatt farm were Russell Hartvigsen, Lowell Schlapia, Franklin Hunter, Lloyd Ruff, Carl Gnade, Clayton Hovey, and Walter Myatt. Pete was injured when he stepped over the power takeoff on a baler while making hay on the Walter Myatt farm.

Merlin Cooper, for more than 30 years an employee of the Maquoketa post office, has retired. A clerk in the local office since 1950, Merlin has been both a carrier and substitute carrier on Maquoketa mail routes.

Jackson County Coroner Dr. J. A. Broman has ruled two elderly Bellevue sisters were victims of a murder and suicide. Mrs. Emma Clarke, 77, is believed to have fatally shot her 86-year-old sister, Mrs. Louisa McInerney in the back of the neck with a .22-caliber revolver.

Sept. 4, marked the date of the 100th baby born at the Jackson County Public Hospital. Marcia Ann Cavin, daughter of Mr. and Mrs. Samuel Cavin, Baldwin, weighed 6 pounds, 9 oz., when she was born.

August Adrian of Maquoketa sold 15 steers that averaged 1,215 pounds a head for $29.75 per hundred, market officials report. He also sold 13 heifers averaging 1,060 pounds for $25.50 per cwt. The cattle were of mixed breeding and were home raised.

Andrew: This popular store is well known to the citizens in and surrounding Andrew as a dependable shopping center. The Mohlenhhoff General Store carries a full line of merchandise, “Best in Everything” and is exclusive headquarters where many people come as their trading center. This store is strictly a home-owned institution and J.H. Mohlenhhoff is a public-spirited person upon whom the community can depend.

Springbrook: A party of state highway engineers and federal representatives were over highway No. 113 between Springbrook and No. 62 making inspection for a newly proposed road which will give people in that community a sorely needed outlet. This roadway, the subject of considerable controversy, has been a sore spot to both highway commission members and people in that vicinity who have for some time attempted to secure improvements.

Ten Jackson and Clinton county farm youths have been awarded scholarships in the National Farm Youth Foundation, it was announced today by Roy A. Lindberg, of the M. & W. Auto Co., Maquoketa. They will start their studies immediately. Winners in these two eastern Iowa counties were Donald Stender, Delmar; Leonard Dimmer, Otter Creek; Joe Martin, Bernard; Arthur Bloore, and Allen Gartman, Maquoketa; Dale Brooks, Welton; Charles Butterworth, Andrew; Frank Dempewolf, Bellevue; Donald Anderson, Lost Nation; and Leonard Benischek, Oxford Junction. During the next six months they will complete a course of home study in farm management and engineering and will attend classes locally. They will also compete for salary jobs paying as high as $150 a month, affording specialized factory training and experience in distributor organizations.

A deal was closed several days ago wherein the north one-third of the building known as the Lyon block was leased to the Iowa Electric Company, and workmen are now busy remodeling the building to accommodate the new tenants. A few months ago the entire frontage was remodeled and a stairway made leading to the Legion hall, but we understand that this stairway is to be eliminated to accommodate the Light Company and afford them sufficient space for their offices and salesrooms.

Determined to make the Hotel Decker one of the most modern and high-class hostelries in eastern Iowa, manager George Vance has a crew of men building a fine burnt brick porch entirely across the frontage of the main hotel building. This porch will be canopied with attractive spear-head awnings.

Olin Farmer, proprietor of the Big 4 barber and beauty shop, tells us that he will this week add a two-chair shoe shining stand to his business place which will practically make his shop complete in every detail. Ladies and gentlemen and children may then do a goodly share of their “look-well” shopping in one spot, the bright spot on the corner of Main and Platt streets, known the community over as the “Big Four.”

Greater Iowa Week to boost the sale of Iowa made goods will be from Oct. 3 to 9. Iowa ministers will be asked to preach on “the responsibilities of citizenship.” Iowa manufacturers will be displayed in the shop windows of the retailers.

Bellevue sent over a big delegation to the fair this year and we appreciate it. To prove this appreciation Maquoketa folks will be on hand whenever the river city stages some event. Bellevue and Maquoketa were never in history as friendly as they are today and let’s maintain this feeling.

Mrs. Frank McGovern, whose home is about 5 miles south of Bellevue, was found lying dead by the roadside near her home Thursday afternoon by the driver of the Standard Oil Company’s wagon, who was passing that way making a delivery. Mrs. McGovern had remained at home to can plums, while her husband attended the fair here, and it was evident that she put a quantity of the fruit on the stove and intended for it to cook while she was after some more that grew on the trees nearby, and it was while en route that she was stricken with heart failure and passed away.

Partly cloudy skies in the morning will give way to cloudy skies during the afternoon. High near 60F. Winds NW at 10 to 20 mph.