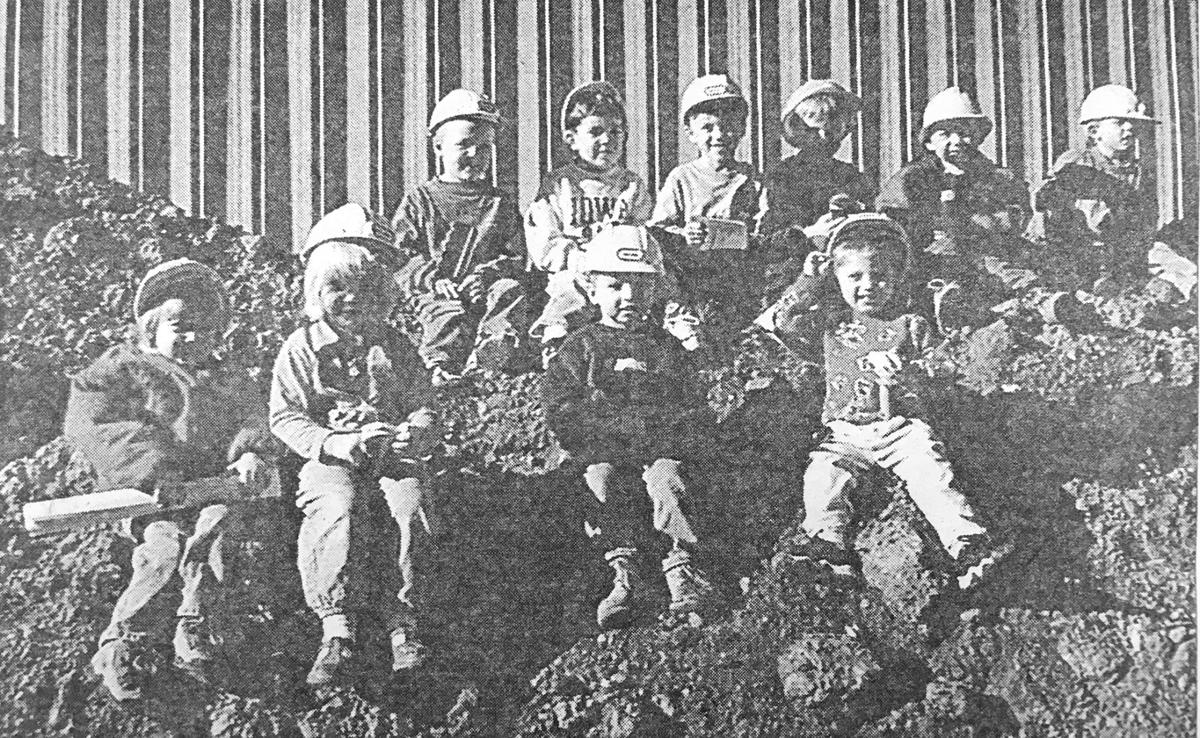 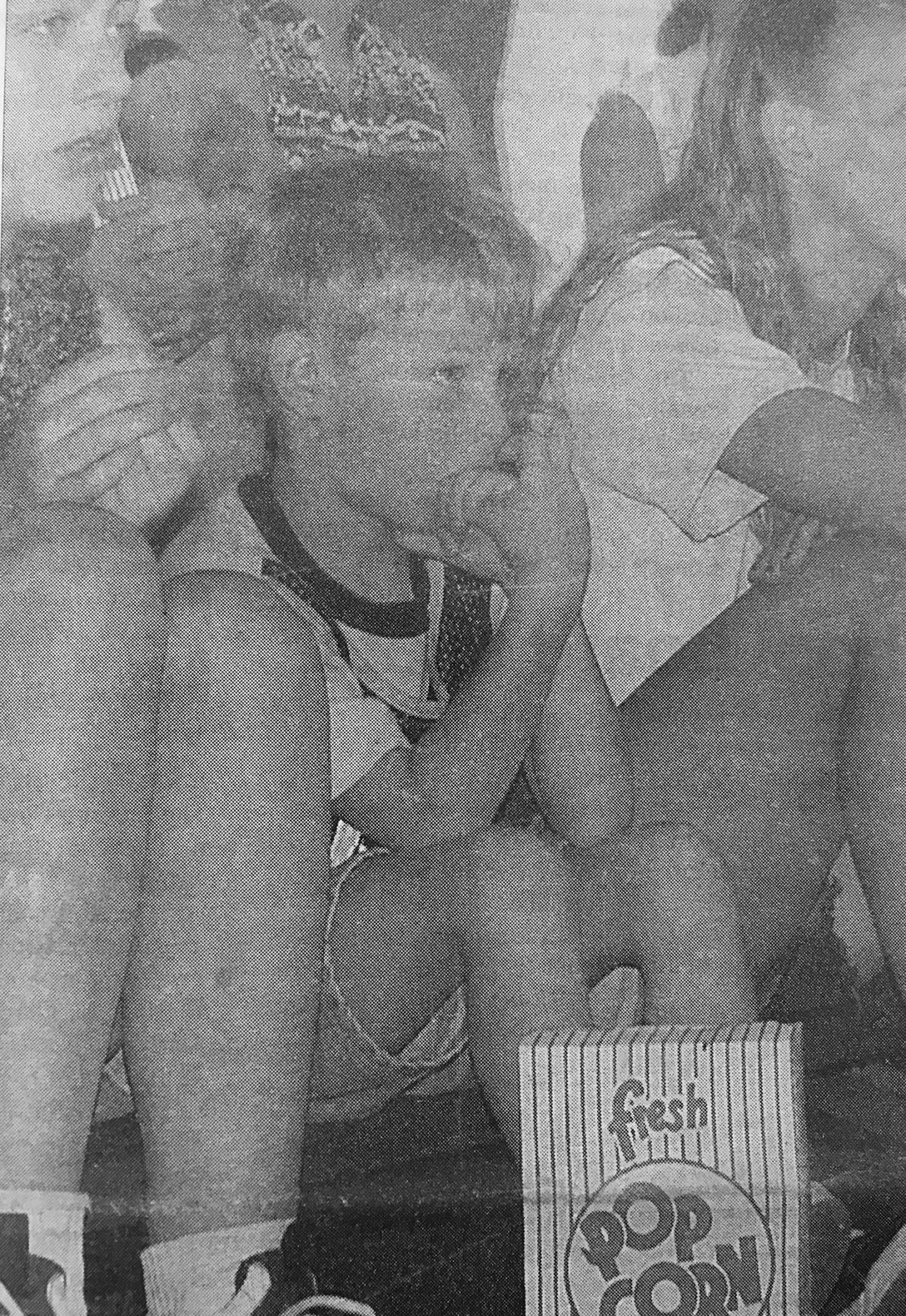 This youngster eagerly watches the circus action under the Big Top at the Jackson County Fairgrounds in the photo from 1999. The Culpepper & Merriweather Circus brother their show to Maquoketa for two performances.

This youngster eagerly watches the circus action under the Big Top at the Jackson County Fairgrounds in the photo from 1999. The Culpepper & Merriweather Circus brother their show to Maquoketa for two performances.

Maquoketa’s No. 1 trapshooting team set a new state record by hitting 236 of 250 shots at a meet in Cedar Rapids.

Don’t let a spring thaw lead to a wet basement. New homeowners may not even be safe from the water Mother Nature delivers each year. Rapid run-off and the frozen ground’s inability to absorb the water leave only one place for the water to go, and unfortunately, it’s right through the walls.

Gale Stickley has gone about the business of collecting cars since 1952. Together with almost 50 years of pursuing his hobby and the fact that he has only ever purchased two new cars in his lifetime, Stickley proves himself a genuine old car enthusiast and collector.

“Students Learn about Environment” featured during the event was a Snakes Alive program, presented by Iowa Department of Natural Resources employee Mike Ourverson and amateur herpetologist (reptile expert) Dan Roth. Some students and their parents held snakes at the Festival.

Maquoketa Community School Board approved hiring Mary Thiel at Briggs, Jane Schmidt at the middle school, plus 12 other new employees.

Three bicycle rides will pedal through Jackson County this summer. The Des Moines RAGBRAI, the TOMRV (from Bettendorf to Savanna) and TOGIR (from Clinton to Dubuque).

A Springbrook farmer remains in serious condition following a tractor accident on his farm. Clarence Michel was rushed to Jackson County Public Hospital and was later transferred to Mercy Medical Center after suffering chest injuries when the tractor he was operating tipped over on him.

Owners of historic Hurstville would like to give four lime kilns to the Jackson County Historical Society. William Lamb and David Schoenthaler, two of the five Maquoketa businessmen who own the town and surrounding farmland, made the offer to the society’s directors. The five owners, including Cliff Lamborn, Bob Osterhaus and Chuck Reichling, say they are concerned about the condition of the kilns that date back to the 1880s.

The Jackson County Humane Society found homes for 32 percent of the dogs brought to the shelter last year, but Mr. and Mrs. Rex Yarolem and Dr. Rob Deegan were also forced to euthanize 31 percent because no one claimed the dog or wanted to adopt it. Those are some of the realities of operating the new shelter at its location in Bridgeport.

Neighbors of Larry Becker’s family gathered at their home Monday evening for a surprise farewell party. The Beckers have purchased the Elmer Mommsen farm east of Elwood on Highway 136 and plan to move soon.

Pfc. Laurence Hilken, son of Mr. and Mrs. Charles Hilken of Dubuque, was killed in action in Vietnam on Easter Sunday. His mother is the former Norma Jackson of Green Island.

Hi Ho Lanes Inc. is constructing and equipping a 12-lane bowling alley west of Maquoketa. They expect to be in operation by May 1.

The town of Hurstville, two miles north of Maquoketa, afforded its some 100 residents this week with motorized fire protection. A truck purchased used from a Rock Island, Illinois, firm, has hose, ladders and a pumper. Hurstville is an incorporated town.

Workers descended a steep embankment to tackle the unpleasant chore of removing 23,000 pounds of meat from a semi-trailer which left Highway 64 between Sabula and Savanna, Illinois, and became submerged in 14 feet of muddy slough water. The driver was uninjured, but the entire cargo was ruined.

Dale Eggers was one of several Iowa boys named to receive the coveted degree of Iowa Farmer at the state Future Farmers of America convention in Cedar Rapids. Dale is a junior at Maquoketa High School and received the award for outstanding work in vocational agriculture. It is the highest FFA award given on a state level.

Announcement was made this week by Clayton “Bud” Miller and Harold Kokemuller of the opening of the new M.K.S. Electric Service retail outlet in Maquoketa Skelgas Co. building north of city hall. The new store makes possible the addition of a full line of nationally-advertised appliances.

Ad: Chicken Ranch only $6,500. About 2 miles north of Maquoketa on a good road with paving half of the way. A nice 5-room home with electricity in good condition. Includes 40 acres of good productive soil in an ideal situation for raising poultry. Double garage, large barn and other buildings.

At a recent meeting of the Elwood School Board Miss Louise Brown was re-elected English teacher in the high school. Another local girl, Miss Merline Calkins, was elected to teach the third and fourth grades while a third Maquoketa girl, Miss June Winegar, will be the new fifth- and sixth-grade teacher.

The American Legion has announced selection of the four boys who will represent Maquoketa at the second Hawkeye Boy’s State Camp at Camp Dodge in June. The selections are Clarence Dallager, Charles Bevan, Bill Sandlin and Jack Barrows.

Despite the fact that several big city contractors had filed bids for the decorative work in the fine new parochial residence at Bellevue, the committee awarded the entire contract to Jesse Miller of this city.

After a battle with brain fever lasting 14 days, little James Cottral Dallagher, four-months-old son of Mr. and Mrs. John Dallagher, passed away Wednesday. Little James was a strong, healthy child until he suffered an attack of measles which so weakened him that he fell an easy prey to the brain trouble which proved fatal.

Mary, the 9-year-old daughter of Mr. and Mrs. Steve Maskrey, was taken to Iowa City with a very severe case of mastoid trouble. An operation was performed, and reports say the little patient is doing fine.

Harry C. Jargo and Florence Cook, both of Miles, were united in marriage. The groom is one of Miles’ most prosperous farmers. Both parties were born and raised in Clinton county near Miles, their homes since childhood being only separated a distance of three miles.