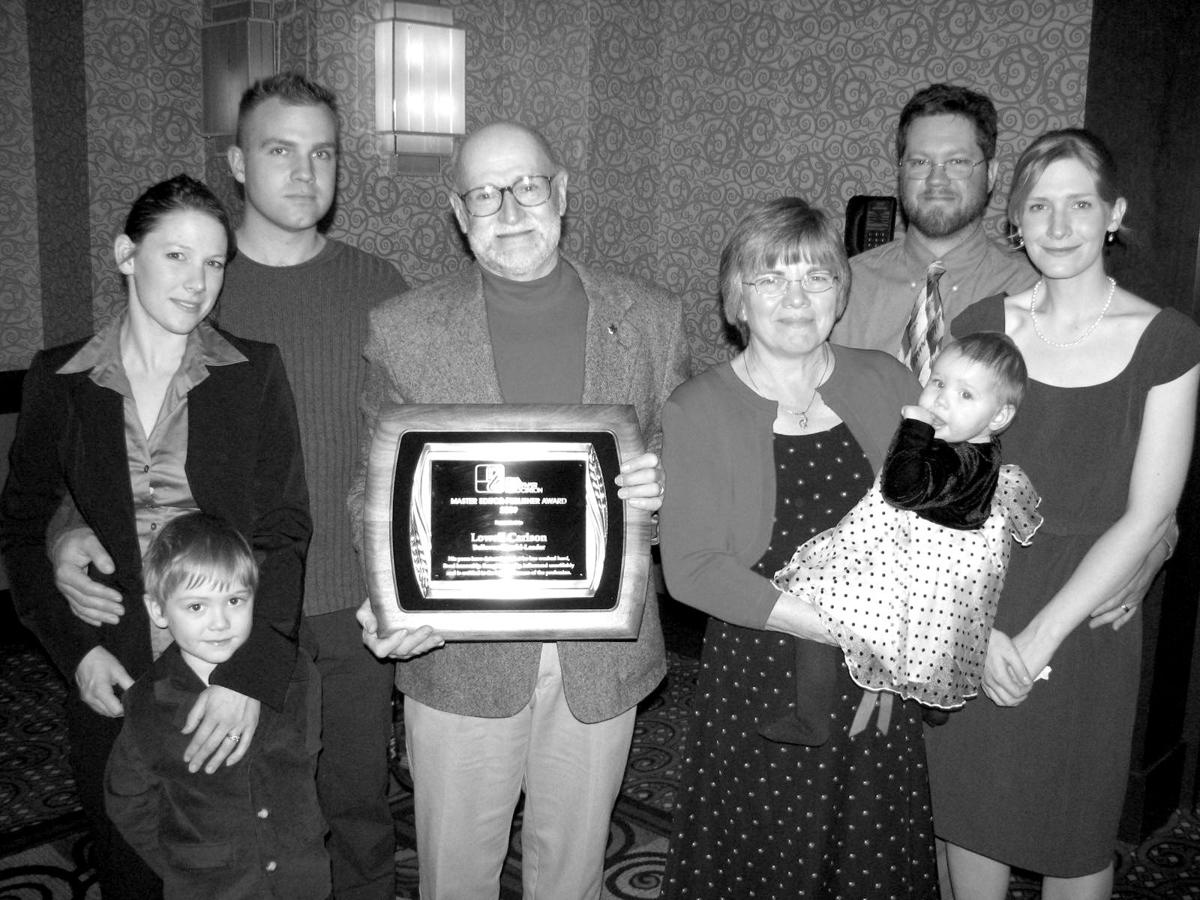 Bellevue Herald-Leader Editor Lowell Carlson was surprised to receive the Master Editor-Publisher Award during the Iowa Newspaper Association’s annual banquet in 2009. He is shown here with his family, who also surprised him at the event. 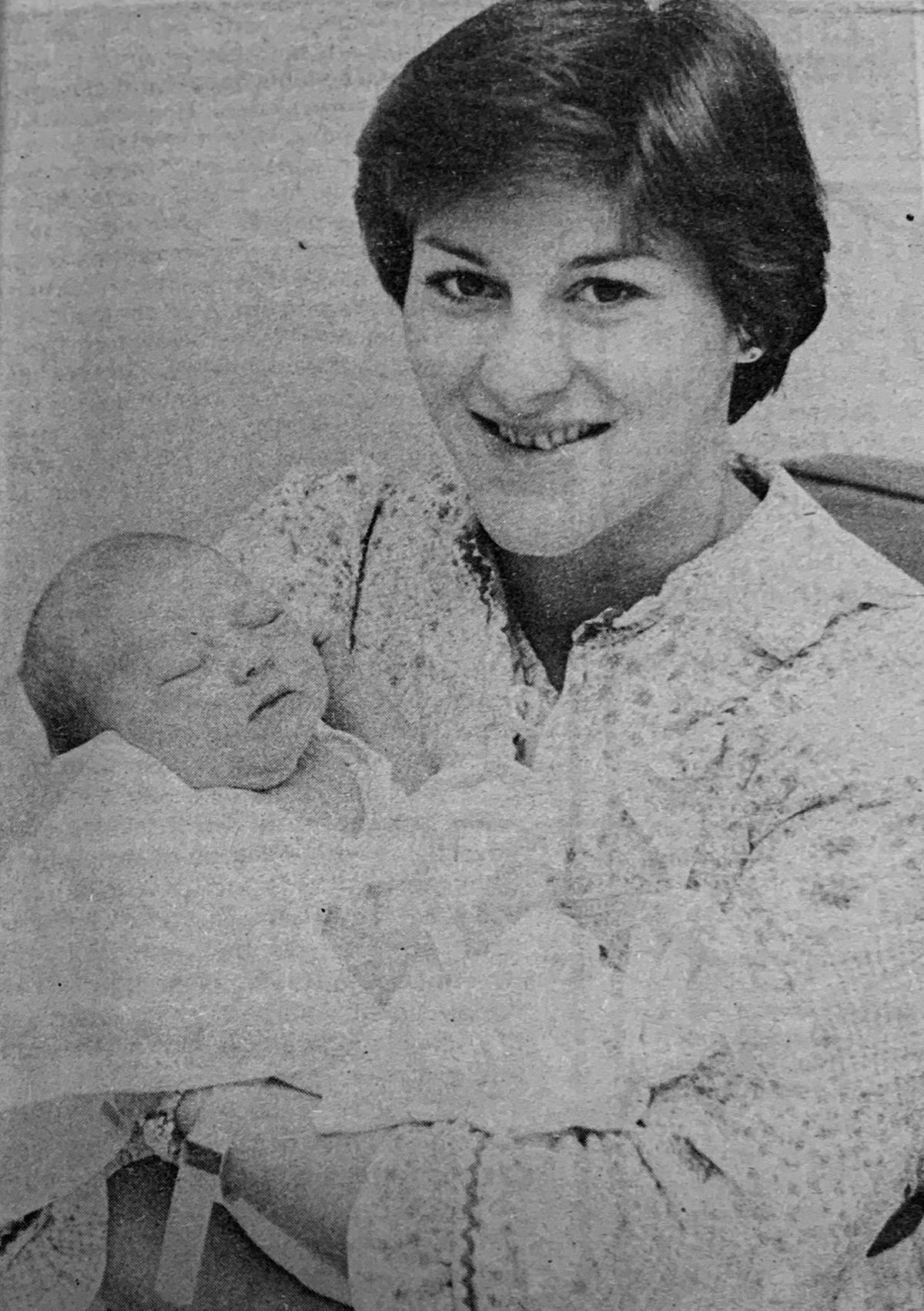 Mr. and Mrs. Wayne Whitman of Grand Mound are the parents of the first baby of 1980. She was born Jan. 2 at the Jackson County Public Hospital.

Bellevue Herald-Leader Editor Lowell Carlson was surprised to receive the Master Editor-Publisher Award during the Iowa Newspaper Association’s annual banquet in 2009. He is shown here with his family, who also surprised him at the event.

Mr. and Mrs. Wayne Whitman of Grand Mound are the parents of the first baby of 1980. She was born Jan. 2 at the Jackson County Public Hospital.

Smoking statistics: One in 6 deaths in the United States is attributable to tobacco. Some 30% of all cancer deaths are due to tobacco. Smokers lose, on average, 15 years of their life. If smokers quit smoking before the age of 50, they have half the risk of dying within the next 15 years as those who continue to smoke.

The Rev. Fate will retire from United Church of Christ in Maquoketa at the end of the month. He will serve as an interim minister in Dubuque after leaving Maquoketa.

Pamida Discount Center donated 1,000 pounds of dog food to the Jackson County Humane Society and Animal Shelter during a December campaign by the shelter to solicit monetary and food donations. During the campaign about 2,800 pounds of food were donated.

Now that St. Donatus, the entire village, has been placed on the National Register of Historic Places the tiny northern Jackson County community will dominate the county’s inventory of historic buildings with 21 new individual sites added to the 25 National Register site already recognized.

Mr. and Mrs. Wayne Whitman of Grand Mound are the parents of the first baby of 1980. She was born Jan. 2 at the Jackson County Public Hospital. Mrs. Whitman is the former Marsha Caven, daughter of Mr. and Mrs. Sam Caven of rural Baldwin.

Three women have launched a new pilot program for helping the elderly stay in their homes. Called Community Helping Hands, the service will provide volunteer workers to do essential household chores the elderly may not be able to perform any longer. Project Concern’s Maquoketa office manager is Irene Deckert and her helpers are Ruth Huebbe and Jean Pirner.

About 400 attended the dance in honor of Mr. and Mrs. Joe Ruby on the occasion of their 25th wedding anniversary.

Maquoketa State Bank announced a new and additional member of their staff. He is Norman Gerdes, a native of Dike, Iowa. Gerdes, assistant vice president, Mortgage Department and serves as a loan officer.

The first baby of 1970 to be born at the Jackson County Public Hospital is little Julie Ann Waite, daughter of Mr. and Mrs. Wayne Waite of Spragueville. Julie Ann was born on Jan. 2.

Maquoketa Meals on Wheels is rolling. The very first meal was served by members of the organization on Jan. 28 to Mrs. Gertrude Woods and five other persons. As of today, there are 10 people taking advantage of this public service. All meal recipients pay 75 cents per meal for this service.

Modern Motor Sales, Maquoketa: Meet our trained Bear Alignment and Wheel Balancing Expert Robert (Bob) Head. Head received his training and diploma from the Bear Training School in Rock Island, Illinois. Head is also our radiator technician. He has a diploma from the Inland Radiator Manufacturing Co. of Omaha.

Jackson County’s 332 old-age assistance recipients received grants totaling $26,562.50 in December. This averaged $80.01 each and included payments made directly to druggist and doctors for drugs and medical services on behalf of recipients.

An unidentified man, apparently bent on robbery, was unexpectedly foiled in his attempt at the Pastime Theater on South Main. The stranger was hiding in the upstairs box office at the local theater, evidently waiting for closing time. When Claude Beck, theater employee, entered the box, the man made his hurried exit leaving a revolver behind.

As the coal shortage in Maquoketa approaches the critical stage, Mayor A.W. Sokol announced that he has appointed Harry C. Fischer, chief of the local volunteer fire department, as co-ordinator. The Timber City mayor notified the Iowa governor that the “coal situation in Maquoketa” was alarming.

The Jackson County Vigilantes have disbanded, it was announced. Lack of funds were given as the cause. Sheriff Ronald Cahill expressed regret today that the organization has disbanded and pointed out that they had served many emergency calls and were able to block every road in the county and have it under armed guard within 20 minutes.

At the regular meeting of the Maquoketa City Council, the council members agreed to erect immediately barricades on certain streets to allow children to coast in safety. The streets to be blocked off are South Eliza, North Otto, Austin and South Prospect. Matinee skating each Saturday and Sunday afternoon at 2 p.m.

Dreamland Rink located at 220 S. Main St., opened and has enjoyed good crowds, it was reported. With a floor 65 x 110 feet, the roller-skating rink is open every evening at 7:30.

According to statistics, there were 127 marriage licenses issued from the office of the county clerk last year, while 14 couples decided that blessedness was preferable and were given passports to go back into the eligible class again.

The Martin Hat Shop, owned and conducted by Mrs. Louise Maolfi, and which for the past several years had been located in the McAllister store on North Main Street, will be located in the southeast portion of the Purinton Variety store.

Seldom does the Angel of Death take within such short time, two very close neighbors, both in their usual health, with the consequent shock to the whole community, as occurred in the sudden passing away last week of William Groenwaldt and Wilson Teeple, the two oldest residents of the village of Nashville.

With the freezing over of the river, the U.S. Bureau of Fisheries at Bellevue completed its work for this season. The main work of this department is the rescuing of fish from landlocked lakes, sloughs and bayous and putting them back in the river. When this work was started in the 1890s, less than a million fish a year were rescued. During the past season 147,079,051 fish were rescued in the territory from Prescott, Wisconsin, on the north, to 10 miles south of Bellevue.

The latest property deals in Preston property, as far as we are advised, is the change in ownership of the old mill site and the Schwartz blacksmith shop. W.J. Schwartz has traded his shop, which includes the building and ground, to F.A. Hunter for the ground on which the old Preston mill stood, opposite the Congregational church.

Income tax man here Jan. 15-March 31: Collector of Internal Revenue Louis Murphy announces that, as usual, income tax deputy collectors will be sent into every county of the state during the period from Jan. 15 to March 15 to assist individuals in making out their income tax returns. No charge for services will be made by these government deputies and no collection of taxes in cash will be made by them.

House for Sale by Owner

Ham and Cheese Omelet Breakfast
We are Celebrating