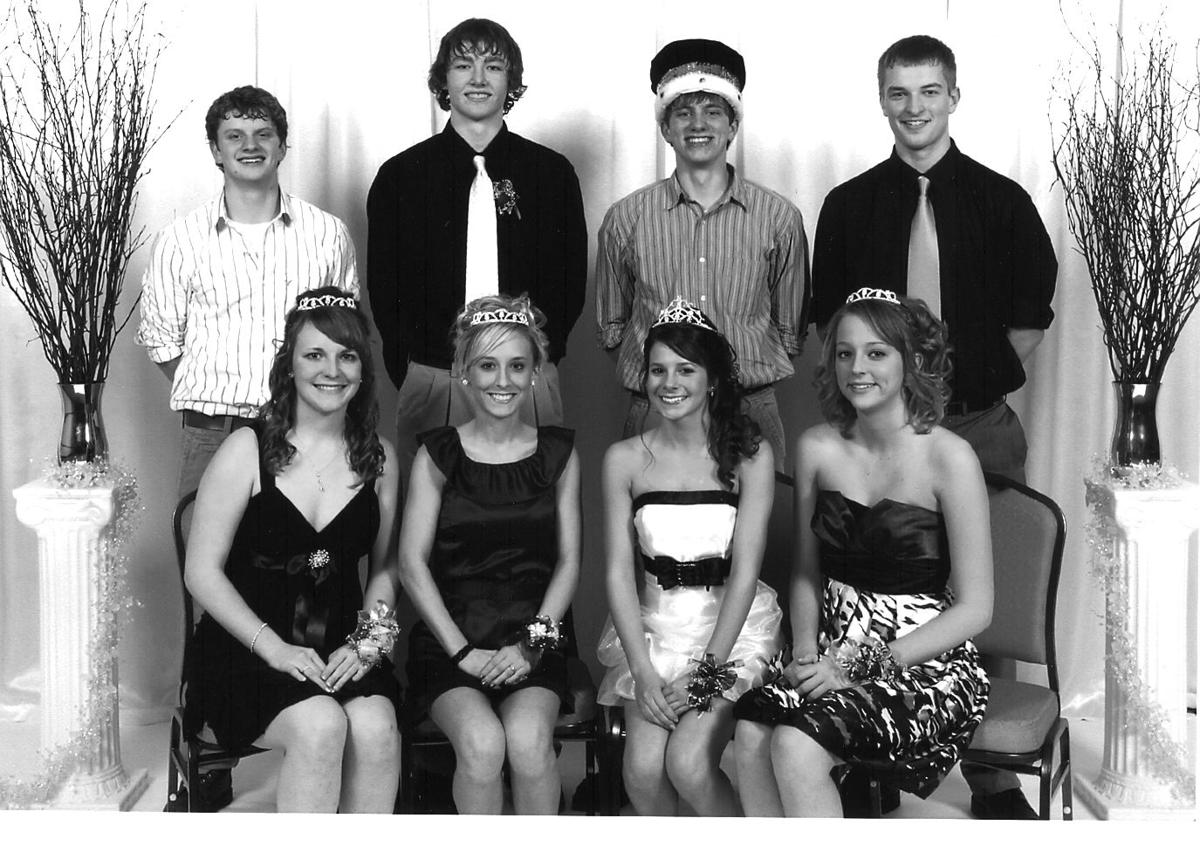 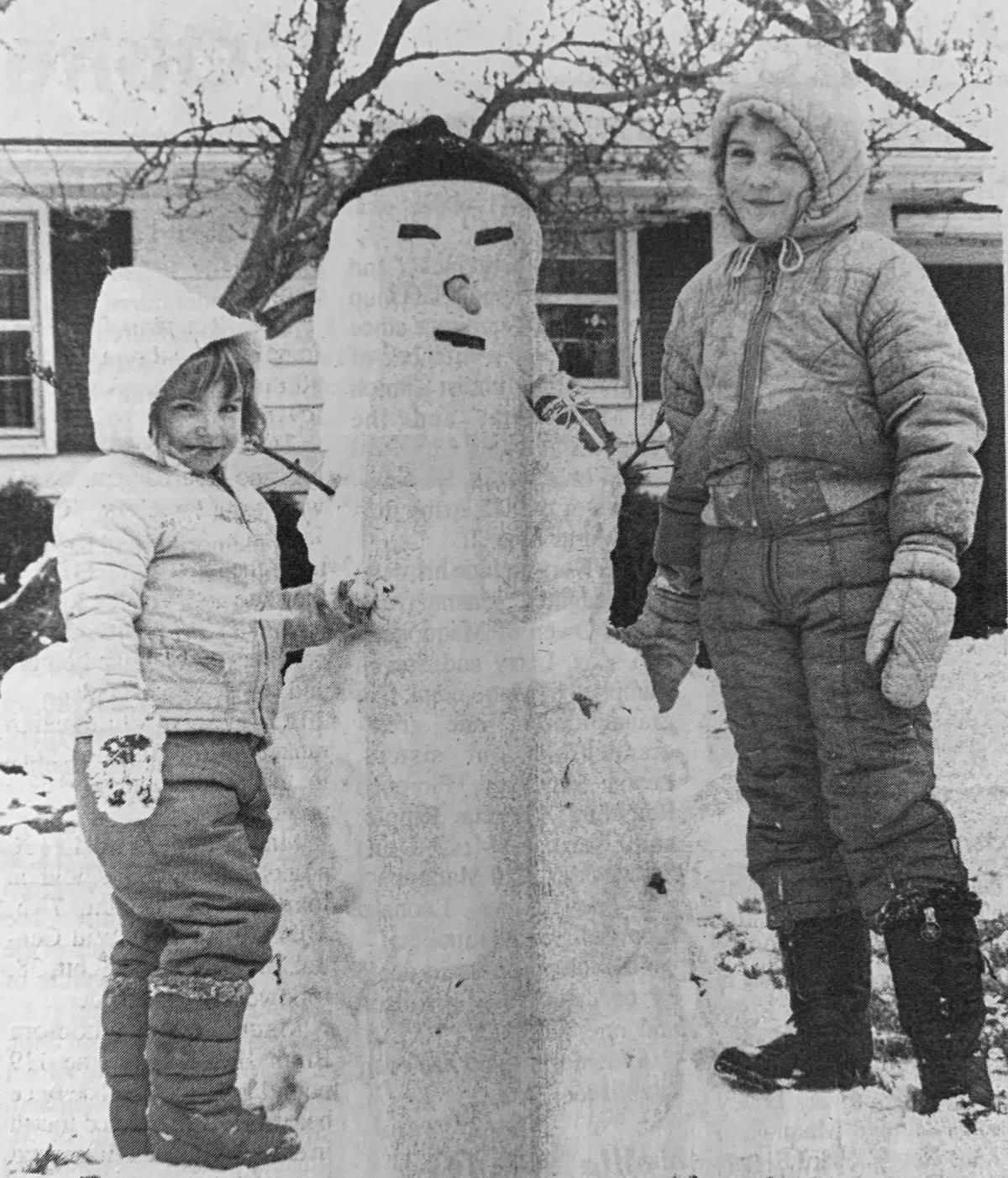 Beth, left, and Nikki Paradise, daughters of Ken and Julie Paradise of Maquoketa, took time out from sledding to pose with their snowman in this photo from 1990.

Beth, left, and Nikki Paradise, daughters of Ken and Julie Paradise of Maquoketa, took time out from sledding to pose with their snowman in this photo from 1990.

Casey’s General Store now officially bookends the city of Maquoketa with locations on the west and east entrances to the city. The west-side store celebrated its grand opening.

Maquoketa City Council can award the contract for the clean-up of the downtown fire debris. G & B Construction of Burlington submitted the apparent low bid, $341,000 to clear away the debris and demolish and remove the building on the northeast corner of Pleasant and Main Streets from the January 2008 fire that leveled four buildings.

The Iowa Senate has officially begun the first major overhaul of state government in almost 25 years. We’ve made tough choices that will save money this year, next year and every year to come, said state Sen. Roger Stewart, D-Preston.

The work of local writer David Rosheim of Maquoketa has been included in a recently published narrative history of the downtowns of Minneapolis and St. Paul, called “Downtown.”

While the main part of wrestling is the individual, the Maquoketa Cardinals showed their team strength with a 4-0 finish to win the Lloyd Rolf Memorial Duals Tournament at Durant.

A Cardiac Support Group will begin this month sponsored by the American Heart Association. The group will establish a support service for people and their families experiencing coronary artery disease.

Back in 1915, two enterprising Maquoketa boys decided to motorize winter. They took a motorcycle engine, mounted it on a sled frame, and used a chain-driven motorcycle wheel to speed the sled over the snow at 40 miles per hour.  The Sentinel pronounced the hybrid vehicle a “perfect success.” Dean Hamley and John Jones reported the sled had a two-speed transmission. The motorcycle wheel could be raised and lowered. The creation had a steering gear, clutch and brake. The hybrid creation used a motorcycle engine and sled runners to send the riders flying over the ice at speeds of 60 miles an hour. In snow the machine would hit 40 miles an hour.

Members of the Maquoketa Area Chamber of Commerce met for their annual meeting and election of officers. At the helm of the business and promotional organization for the coming year is Marge Eaton, owner and manager of Hamilton’s.  She takes over duties from retiring president Rich Skrivseth of Jackson State Bank and Trust.

Mr. and Mrs. Arnold Rickertsen of Delmar will observe their 40th anniversary on Feb. 14 with a family dinner in their home.

For 30 years Fred and John Muhl have operated the Muhl Brothers Locker in Miles. On Feb. 1, they turned over their business to Mr. and Mrs. Frank Zuidema of Fulton, Illinois.

Maquoketa’s Cliff Cornelius has once again found basketball success. After brilliant years at Maquoketa High School and Wartburg College, he is in his fifth year of college at the University of Manitoba in Winnipeg, Canada. Cornelius has led the Bisons to a fast start, and the squad has hopes of gaining the national title in Canada.

Preliminary steps to assist in developing an industrial park in Maquoketa were taken Monday night by Maquoketa city councilmen in special session.

Mark William, infant son of Mr. and Mrs. Robert Gill of Delmar, was the first baby of 1960 born at Jackson County Public Hospital.

Despite near successful efforts to rescue him, a 6-year-old Sabula boy, Lyndell Lee Franzen, drowned when he broke through thin ice on the Mississippi River. He was a son of Mr. and Mrs. August Franzen of Sabula.

Fredrick Hahn, Maquoketa High School sophomore, was judged the winner of the annual American Legion oratorical contest. Hahn will compete against a boy from St. Joseph High School, Bellevue, to determine which shall be the county champion. Carol Deppey and Marjorie Saunders, both juniors, ranked second and third, respectively, with their orations. Two others entered the contest, Barbara Nims and Wanda Stamp.

Jackson State Savings Bank in Maquoketa announced it has installed a night depository for the convenience of its customers who wish to deposit funds for safekeeping after the close of the regular banking hours. A recently installed safe at Jackson State Bank receives the deposits. The burglar-proof safe is encased on three sides with reinforced concrete, in places one foot thick.

Mr. and Mrs. A. J. Cookson, Leopoldville, Belgian Congo, arrived in Maquoketa. Mrs. Cookson, the former Luida Wendel, is the daughter of Mr. and Mrs. George Wendel, 210 N. Eliza St. Mr. Cookson is program director for the Belgian Broadcasting Company in the Congo. Mr. Cookson, a native of England, had never visited the United States before. He finds the climate rather damp and extremely cold.

Due to the heavy snow, the roof of the boiler room in the old Iowa Electric Company plant on East Platt Street caved in, and clean-up work is now being done. Eugene Mohr, local office manager, stated that actual work of tearing down the building would not start until spring when a new modern sub-station would be erected in its place.

E.C. Pankow, 75, postmaster at Spragueville for 43 years, announced his retirement, effective Feb. 1. Pankow was forced to retire from his duties due to an act passed by Congress early last year. Leo Helmle, of Spragueville, has been appointed acting postmaster.

Background on the 1941 Iowa license plate will be a “sedate” white, in contrast to the “loud” orange of this year. James Allen, superintendent of motor vehicle registrations, explained in announcing the color scheme change at a state executive council meeting today that there had been “some dissatisfaction and some complaints” against the orange plates.

It will be interesting for our city residents to know that the new 565 H.P. McIntosh & Seymour diesel engine is now installed and in service at the Maquoketa Municipal Light Plant, and that every person interested in municipal affairs is urged to visit the plant and see “what the city owns” in operation.

Walter Morehead purchased from Mrs. Murray Turner her farm west of Iron Hill, located by the Cherry Grove school. The farm consists of 115 acres and is located near Morehead’s other farm, now occupied by his son, Theodore, who will operate both farms the coming year.

Members of the Methodist church of Fulton appreciate the gift of a supply of stove wood for the church, which was donated by Fred Frank. Also, the kindly spirit of the eight men who met Wednesday of last week and prepared the wood for the saw. It was later sawed into stove wood length by Alva Rockwell, whose services were also donated. At the close of the day enough wood had been cut and put in the church basement to last a year.

St. Donatus was the scene of a big fire when the grist mill belonging to Peter Hingtgen was totally destroyed. The residents of the town turned out and by hard work saved several buildings which were near the mill.

The block now occupied by Dr. A.M. Avery’s drug store was purchased by J.W. Brady from the Charles Von Schrader estate. The Brady Electric Company will make it their headquarters. This block was known formerly as the Mitchell block and is located on the corner of Main and East Platt street.