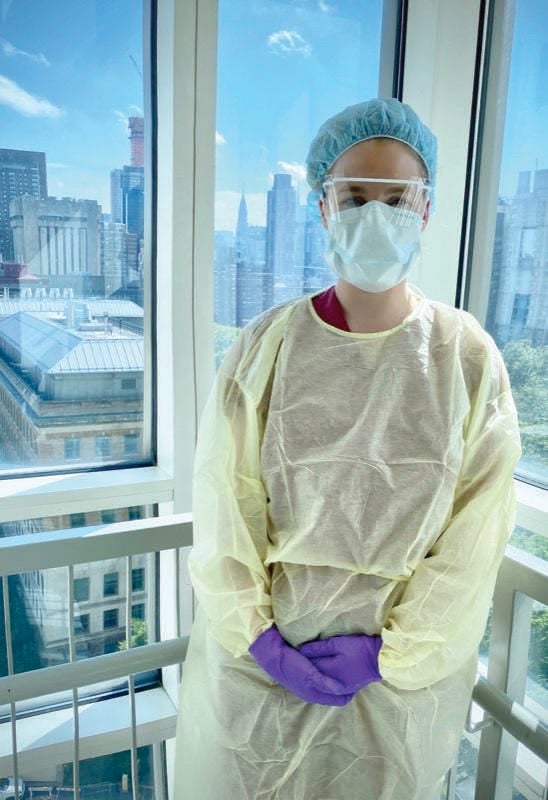 When Jess Olson worked in the ICU at a New York City hospital for two months this spring, all her patients were covid-positive. She is pictured in what she normally wore: An N-95 mask with a surgical mask over, a bouffant cap, a plastic face shield or goggles (whichever she could find), a gown, and two pairs of gloves. She and her co-workers initially had to reuse personal protective equipment because the hospital did not have enough to go around. 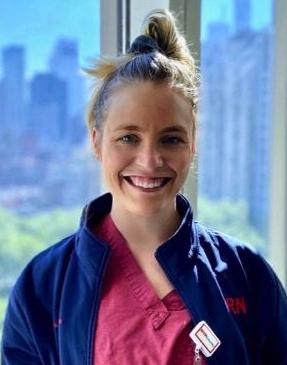 Jess Olson routinely commutes to her shifts as an operating room nurse at a New York City hospital, changing subway lines at the Times Square station, where tens of millions of people pass through each year.

For the past few months, instead of navigating through the usual hustle and bustle to get to her train, the Maquoketa native walked on a virtually empty platform on her way to New York Presbyterian Weill Cornell Hospital where she joined other frontline healthcare workers caring for seriously ill Covid-19 patients.

“The early weeks of March I remember commuting to work and going through so many emotions on my way there. I’m living in one of the largest cities, and every day I’m traveling in and out of a hotbed for Covid-19. It was a lot to process,” she said in email and telephone interviews last week. Her boyfriend, a lawyer, began working from their apartment on the Upper West Side, and businesses around them closed.

“It was really weird to be outside and commuting to work; it still is. I think people who live in areas that haven’t been heavily hit think it is not as bad as it really is. My whole world was turned upside down and many of my patients didn’t make it; it’s a very sad and serious issue, and I don’t think we’re through it yet,” said Olson, who graduated from Maquoketa Community High School in 2009 and is the daughter of David and Karla Olson.

Things at the hospital are slowly returning to normal; but Olson won’t soon forget the months when New York City became the global hotspot for the coronavirus pandemic.

She watched as a fellow nurse, 28-years-old, was intubated after contracting the virus. She watched many patients, often in their 70s or older, die. Patients whom she and other nurses were “doing everything in their power to keep alive,” she said.

“The main feeling was really a fear of the unknown,” Olson recalled. Part of the fear revolved around the new challenges she would face at work when she learned the operating rooms would be converted into intensive care rooms, and she would cross train to work with Covid-19 patients.

“Back in early March we heard rumors that our hospital was very quickly approaching the capacity we could handle of covid-positive ventilated patients. Where would we get more vents? The answer was the anesthesia machines in the operating room,” she said. She and her colleagues worked quickly to convert 14 operating rooms into double- or triple-occupancy ICU rooms.

She did a three-day crash course on how to manage the influx of patients, then – having never been a floor nurse or an ICU nurse before – she went to work, switching from four day shifts a week to three 7 p.m.-to-8 a.m. night shifts.

“We approached work in the ICU as a team so you always felt supported and that you could practice within your skill set. We were usually responsible for two to four patients together,” she said.

What she learned about herself was that she was a better nurse than she’d given herself credit for with a wider range of skills than she’d imagined.

“I was able to learn quickly and adapt from the operating room to the ICU. While I had tons of support and shared the patient load with someone with critical care experience, I was definitely pushed outside my comfort zone,” she said. “I also learned a city can really band together and support each other in times of crisis. This has been remarkable to witness.”

She credits social distancing and the stay-at-home orders in place in New York for helping ease the number of new cases. She goes nowhere without a mask, not even to take her dog on a walk. As she says, especially after seeing the toll the virus takes on the elderly, “I’m not wearing a mask for myself, I’m wearing it to protect your grandparents.”

The hospital’s operating room was back up in mid-May, and she resumed her regular job as the regular schedule of surgeries slowly resumes.

After earning a bachelor’s degree in human physiology from the University of Iowa and a bachelor of nursing at Resurrection University School of Nursing, she worked in Chicago, Washington D.C., Detroit and Ann Arbor, Michigan, before settling in Manhattan last May when her boyfriend got a job in the city.

The hospital where she works still has many positive coronavirus cases, and since converting back to the operating room, all surgery patients are tested. After living in the city just over a year, Olson said the past few months have been “just crazy.” She is guardedly optimistic about things returning to normal.

“I am nervous a second wave will hit again during flu season this fall and winter,” she said. “I’m glad New York has had great leadership that advocated early for social distancing and stay at home orders. I believe we were able to flatten the curve and things were better than they could have been.”

Thunderstorms this evening followed by a few showers overnight. A few storms may be severe. Low 66F. Winds NNW at 10 to 15 mph. Chance of rain 100%.

Thunderstorms this evening followed by a few showers overnight. A few storms may be severe. Low 66F. Winds NNW at 10 to 15 mph. Chance of rain 100%.