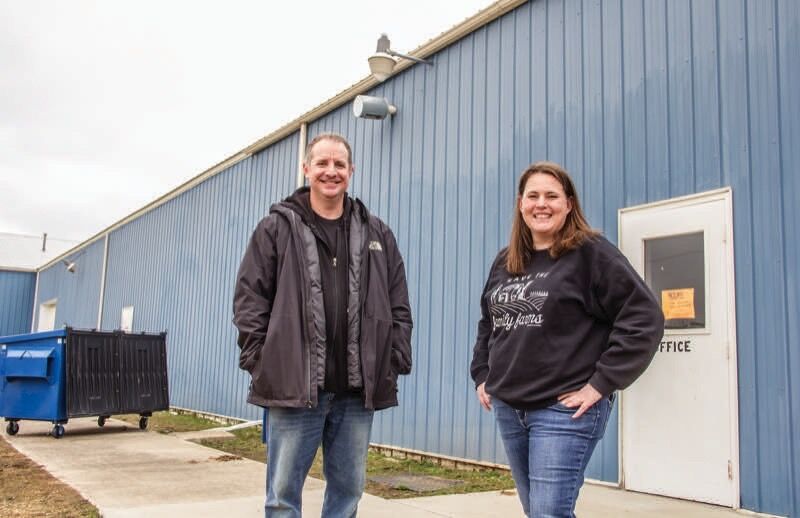 Chad Thompson, left, and Heather Moore stand in front of the 605 Birch Drive building that soon will be a meat-processor under the name Rockdale Locker and a creamery and retail outlet called Moore Local. 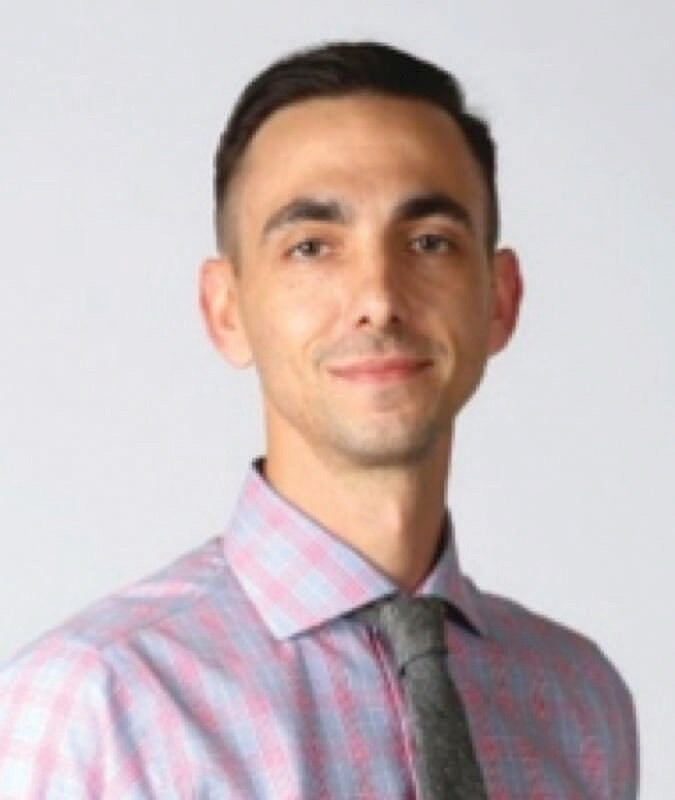 “Agriculture is a pillar of the Jackson County economy and this business will bring back processing capability to the area creating more resilient food processing infrastructure for our producers.”

An entrepreneurial business venture between two rural Maquoketa couples will lead to a new creamery and meat processor and expanded retail outlet.

Heather and Brandon Moore are partnering with neighbors Chad and Kim Thompson to renovate the former blue tin Woodform building at 605 Birch Drive, Maquoketa, into Moore Local and Rockdale Locker.

Moore Local will include an expanded and locally sourced grocery and gift retail store. It also will feature a creamery where the Moores will churn their locally produced milk into cheddar cheese.

Rockdale Locker will handle a 1,200-head beef equivalency of livestock, including beef, pigs, sheep and goats. The livestock will be processed and packaged to order.

“Our goal is to help get the food people want and need to them, and now I think we’re poised to do that,” Heather Moore said.

Creation of the local food production and processing hub in Maquoketa will positively impact the community, according to Nicolas Hockenberry, director of the Jackson County Economic Alliance.

“Agriculture is a pillar of the Jackson County economy and this business will bring back processing capability to the area creating more resilient food processing infrastructure for our producers,” Hockenberry said. “Additionally, with the growing interest in local food, this project creates a retail hub elevating local producers and will provide fuel for other start-ups.”

The overall project comes with an estimated $2.3 million price tag.

The Thompsons and the Moores also seek financial assistance from the Maquoketa City Council, which was scheduled to hear the details of the project Monday night.

Rockdale Enterprises, with the help of the Jackson County Economic Alliance, asked the council to sign a development agreement in which Rockdale Enterprises. Under the agreement, Rockdale Enterprises agrees to make about $2 million in improvements to the property and asks the city to consider a 50% tax increment rebate for up to 10 years or a maximum total rebate of $150,000 — whichever comes first.

“The rebate incentive is just related to the increased property taxes that will be paid as a result of the $2 million property improvements,” Hockenberry explained.

Whether the council made a decision in the matter was not known as of press time.

From genesis to reality

The idea of a creamery percolated for quite a while in Moore’s mind. She opened a pop-up shop in Maquoketa in 2015, with the intent to be open only through Christmas. The business venture added Edgewood Meats, ice cream, and more and became a permanent store.

But the Moores hoped to be able to make their own cheese in Jackson County instead of having it made out-of-state.

“We’d been looking for some time to make our own cheese and realized the potential was here,” Moore said.

The pandemic cemented the need for the creamery, the grocery/retail store, and a new concept — a meat processor.

Shortly after the pandemic began, “I had a really hard time watching, seeing empty store shelves,” Moore said. “We’re in America’s heartland, 24% of Jackson County is in agriculture, and still shelves were empty. People couldn’t get milk and meat and eggs.

“That was really hard on me. I looked out my window and saw our cows and milk but knew we couldn’t sell it to people,” Moore explained. Across the country, dairy producers dumped their milk due to a drop in demand from schools, restaurants, and other food service providers because of the coronavirus pandemic. That sudden shift in demand meant a glut of milk with nowhere to go.

Also, the Thompsons and the Moores knew people whose livestock were dying because some meat processors closed due to the pandemic and others were booked 16 to 24 months in advance due to a shortage of processors.

“I guess we all had a conversation one night last summer and so it started,” Chad Thompson explained.

The two couples discussed the need for a creamery and a locker and considered building a facility near their homes north of Maquoketa. However, the Moores had been working with the Jackson County Economic Alliance on a plan for the creamery, and the former Woodform building was available for sale.

Construction for Rockdale Locker already is underway, said Thompson, who tentatively plans to open this summer. Meat will hang for 20 days instead of the industry-standard 11 days, he emphasized. That’s because the longer the meat is hung, the better the flavor is, he said.

“We’re hoping to expand this service into the community,” Thompson said. “Our goal is to put out a really good product.”

Last month, the Moores reopened the retail store on weekends with a limited inventory. Moore said the weekend sales this last month surpassed the entire month of March last year.

Moore Local will not offer a drive-thru window as it did on West Platt, but there will be ice cream, coffee, and some sandwiches, as well as expansion of locally sourced inventory including Edgewood Meats, candy, snacks, frozen meals, cheese curds, and of course, cheddar bricks by Moore Family Farms.

Moore said the creamery should be open before the end of the year.

A new way of drive-thru banking...