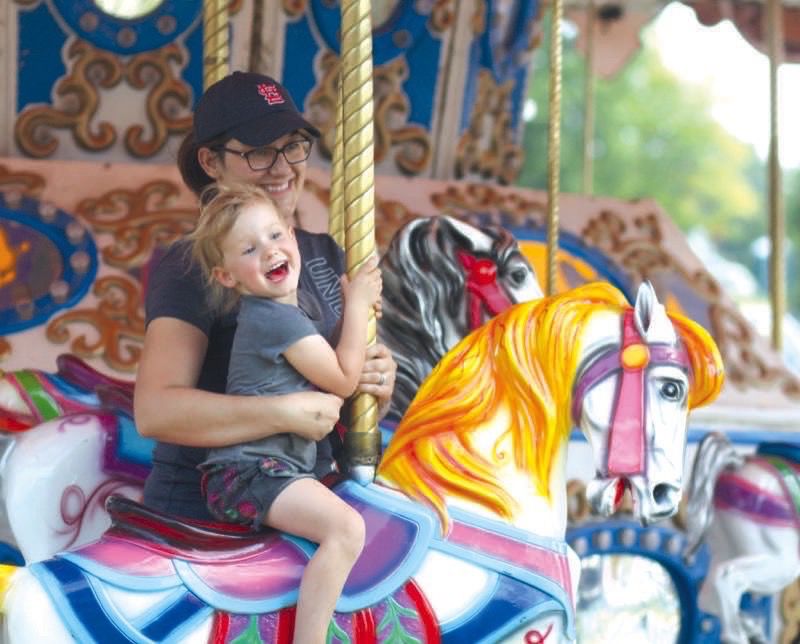 Jenifer Mumfrum holds on to Russ Eisenhart as they enjoy the merry-go-round at the 2019 Jackson County Fair. 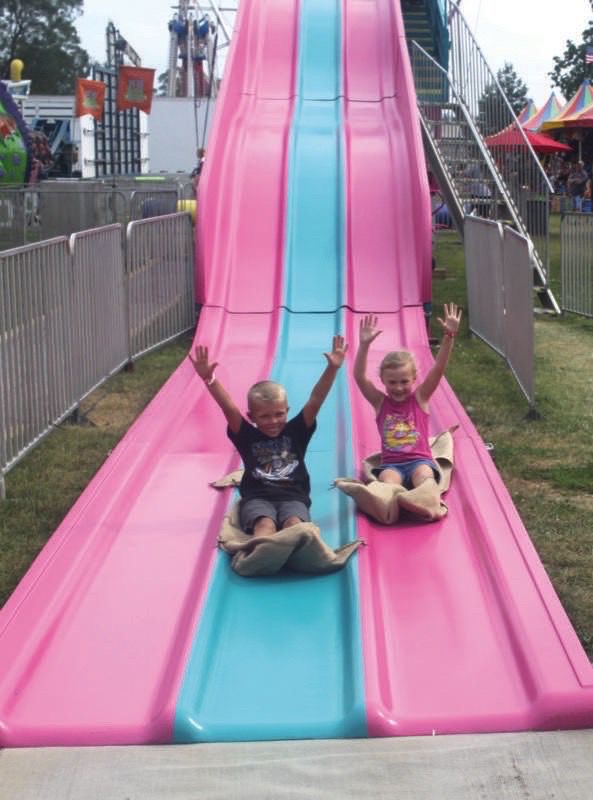 Camden Anderson and Taylor Anderson enjoy the big slide as they go up and down multiple times during the 2019 Jackson County Fair.

Jenifer Mumfrum holds on to Russ Eisenhart as they enjoy the merry-go-round at the 2019 Jackson County Fair.

Camden Anderson and Taylor Anderson enjoy the big slide as they go up and down multiple times during the 2019 Jackson County Fair.

Planning a county fair requires a lot of work – and a long checklist – according to Lanny Simpson, Jackson County’s longtime fair manager.

Preparations for this summer’s fair began 10 months ago, and the vast majority of big decisions have already been made.

This year, however, Simpson and her crew are facing a heavy dose of uncertainty

because of the COVID-19 pandemic, which has added new items to the checklist, including preparations for the possibility of a virtual fair.

For now, the fair is still scheduled to start July 28 and run through Aug. 2, but that could change.

Around the state, many summer events have already been canceled.

The Linn County Fair Association cancelled its event, which was scheduled for the end of June, and Preston cancelled its annual carnival fundraiser. Bellevue’s Heritage Days committee decided not to hold Independence Day festivities in July. Even the Iowa State Fair may be in jeopardy  as officials are considering whether the 11-day event in Des Moines should happen.

Simpson said the Jackson County Fair Board expects to make a decision July 1.

In recent years the fair has ridden a wave of success, nearly doubling attendance over the past decade, setting a record last year with 50,400 paid admissions.

Building big crowds has always been Simpson’s goal, but now, in a time when medical experts are recommending social distancing, that goal may have to change.

Many factors – some economic, some health-related – will go into the decision, but ultimately, Simpson says the decision will be about safety.

“The health department is really the final call whether to cancel (the physical event). If they give us the go ahead, discussion between the Board of Supervisors, the Fair Board and the Maquoketa authorities will then happen.”

If the fair is canceled, there could be significant economic consequences, Simpson said.

The fair association has already paid thousands of dollars in deposits for music acts Trace Adkins, Snake Oil and the Spazmatics, which the association will not get back, Simpson said.

The fair association also pre-purchased necessities such as garbage bags and toilet paper. They are now analyzing what else would be needed to keep staff, volunteers, and fairgoers safe.

Before the pandemic, Simpson already worried about the cost of garbage removal because recycling is no longer an option in Maquoketa.

“Now I am really concerned for the cost because of the items added to the garbage because of all the possible sanitation items, i.e., gloves, masks, additional cleaning rags, that will be added,” Simpson said.

She is trying to devise virtual fair activities in case people are not allowed to congregate on the grounds. For example, she is considering the possibility of open class competitions that would be judged online. Maybe entrants in the knitting category could submit a photo of their entire project and a closeup of it to be judged, she said.

She hopes the situation doesn’t have to come to that, “but in the back of my mind, I’m trying to make up a fair you can visit on your computer versus being there.”

If the fair is allowed to go on, Simpson said she is concerned about how to hire enough personnel to wipe door handles, counters, card swipe machines, etc.

“And,” Simpson asked, “how do you sanitize the handrails and the seats in the grandstands with people coming and going all the time?”

There’s also this question: Even with extra precautions in place, will people show up?

“The country may reopen,” Simpson said, “but will people want to travel?”

Aside from the fair being in question, the fair association is feeling other negative financial effects associated with the pandemic. All events scheduled for the past two months — wedding receptions, flea markets, etc. — have been cancelled.

The cancellations are “affecting our bottom line” and leaving some staff with no work to do, Simpson said.

But despite all those challenges and questions, she is hopeful.

“The most important thing is that we are all safe and able to have a future,” she said. “We will have a fair, whether that will be virtual or physical, hopefully.”

Cloudy skies early will become partly cloudy later in the day. A stray shower or thunderstorm is possible. High 86F. Winds NNW at 5 to 10 mph.