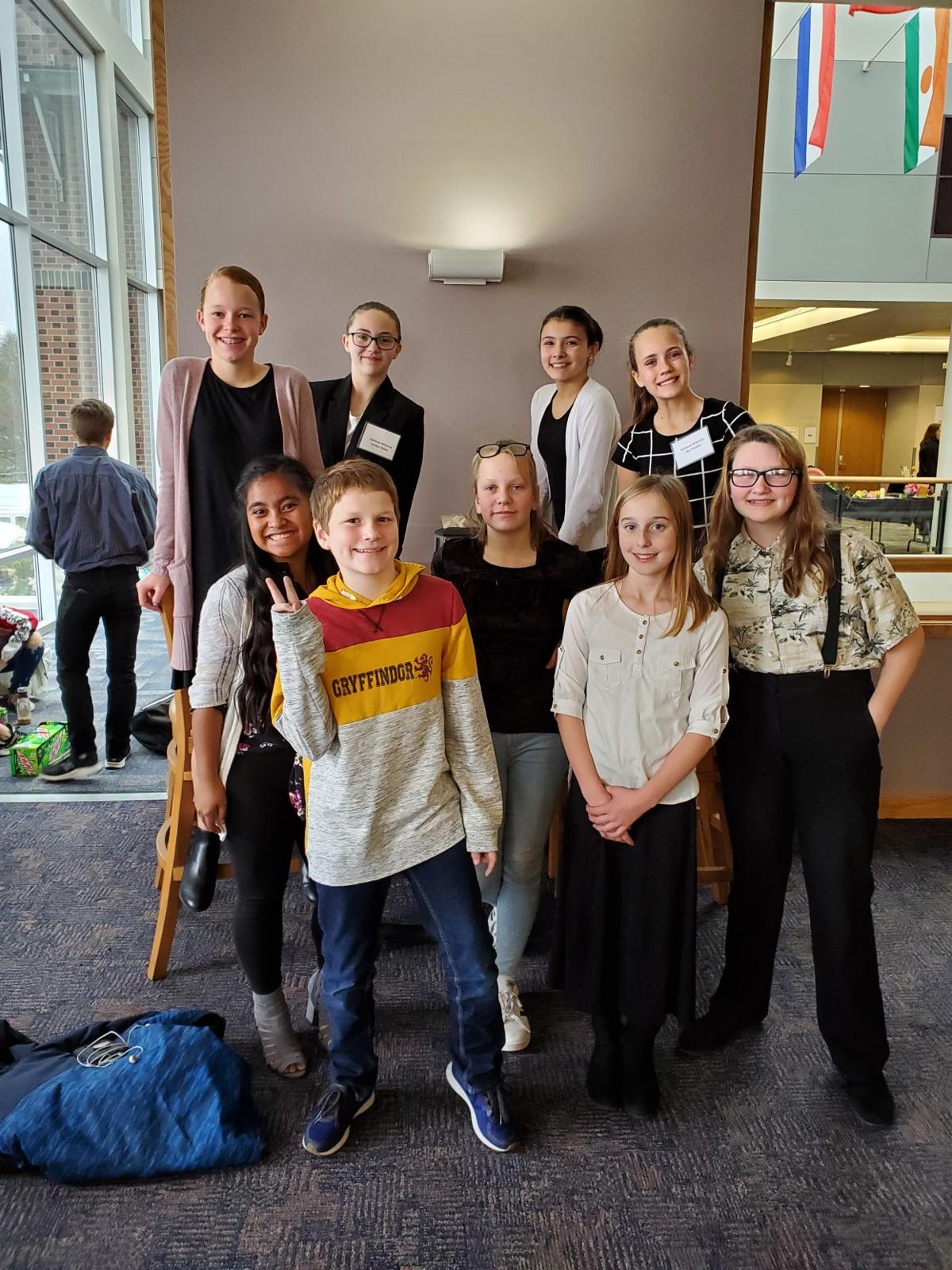 For many, the fall is a time for changing leaves, cooler weather, and preparing for snow.  For the middle school, fall signifies a different experience.  This season signals a time to prepare for Mock Trial (MT) competition as students learn terms such as plaintiffs, defendants, hearsay, irrelevant evidence, and leading questions.

The Iowa Middle School Mock Trial experience is the largest in the nation, and local students become part of this experience each fall.

Across the nation Mock Trial teams are presented with a legal problem and set out to prepare and present both sides of a case to a panel of volunteer lawyers and judges at regional competitions. This year’s scenario was a criminal case in which defendant Dr. Coco “Pibb” Sinclair was charged with first-degree murder. According to Iowa Code 707, it was malice aforethought — deliberately causing the death of his best friend Pepper Albertson. The students’ goal was focused on how to prove guilt beyond a reasonable doubt or how to plant reasonable doubt in the judges’ minds depending upon the side the students represented. Teams are guaranteed experiences as both plaintiffs and defendants, so they must prepare for both sides of the case.

Through the Mock Trial Program, participants get a hands-on opportunity to experience legal processes and contemplate legal issues. Sponsored by the Iowa State Bar Association, it provides a focus on critical-thinking skills and aids in the development of research and presentation skills. It is authentic learning and time intensive.

After their Friday participation, the teams spent time reviewing the critiques provided by their judges. Seventh-grade team members closely examined the judge’s results from their performance while writing their perspectives in their own Mock Trial journal. Melmarie Keller, a witness in the Mock Trial, described the experience as “very nerve-racking” and found it a challenge to memorize lines.

Jordyn Bickel, MT lawyer, explained, “It was fun as I worked to prove if someone was guilty or not guilty — depending upon the side of the issue I was representing.”

Mia Powers found MT to be a really good experience.

“It was frustrating not knowing how the judge would rule,” Powers said. “I had to deal with the panic if someone objected to what I was saying, but it was fun getting into my Mock Trial character.”

Eighth-grade team members were also enthusiastic about the Mock Trial process. Alaina Bahl said, “I learned about speaking in front of large groups of people. It was interesting to learn more about the law.”

Aubrey Howell, in her first year of competition, admitted to her nervousness.  She shared that one of the most valuable lessons was in learning “how to interact better with people.”

Skylar Burkey, in year two of this competition, found team building to be a strong aspect of the program.

“I knew what was going to happen, but there were still new experiences.  We were able to meet lots of people from other schools. The Mock Trial experience was educational while having fun,” Burkey said.

This year during her classes Beth Wold, Talented & Gifted teacher at Maquoketa Middle School, prepared three teams, one from each grade level. She guided them in the process of the composition of opening statements, attorney examinations, witness questions, and closing arguments. Wold said 2019 was the first time she took three teams to the competition, and she could not have done it without the help of her chaperones — Dana Howell, Josh Koob, Cari Pickup and Angie Scholl. Cari, a high school senior, was a former MT participant on a team that earned the honor of going to state. Wold praised Cari’s assistance as a great help in preparing teams to represent the middle school, volunteering her time with the middle school classes.

Even though none of the teams qualified to move on, Wold was pleased with their progress.

“Overall, it was a great day!” Wold reported. “We are trying to build a culture of success in Mock Trial here at the middle school, and I am looking forward to the sixth- and seventh-grade students returning next year. They will bring with them what they have learned and make it even better.”

Building a culture of success in Mock Trial takes time, but with returning participants there will be a strong foundation upon which to build.