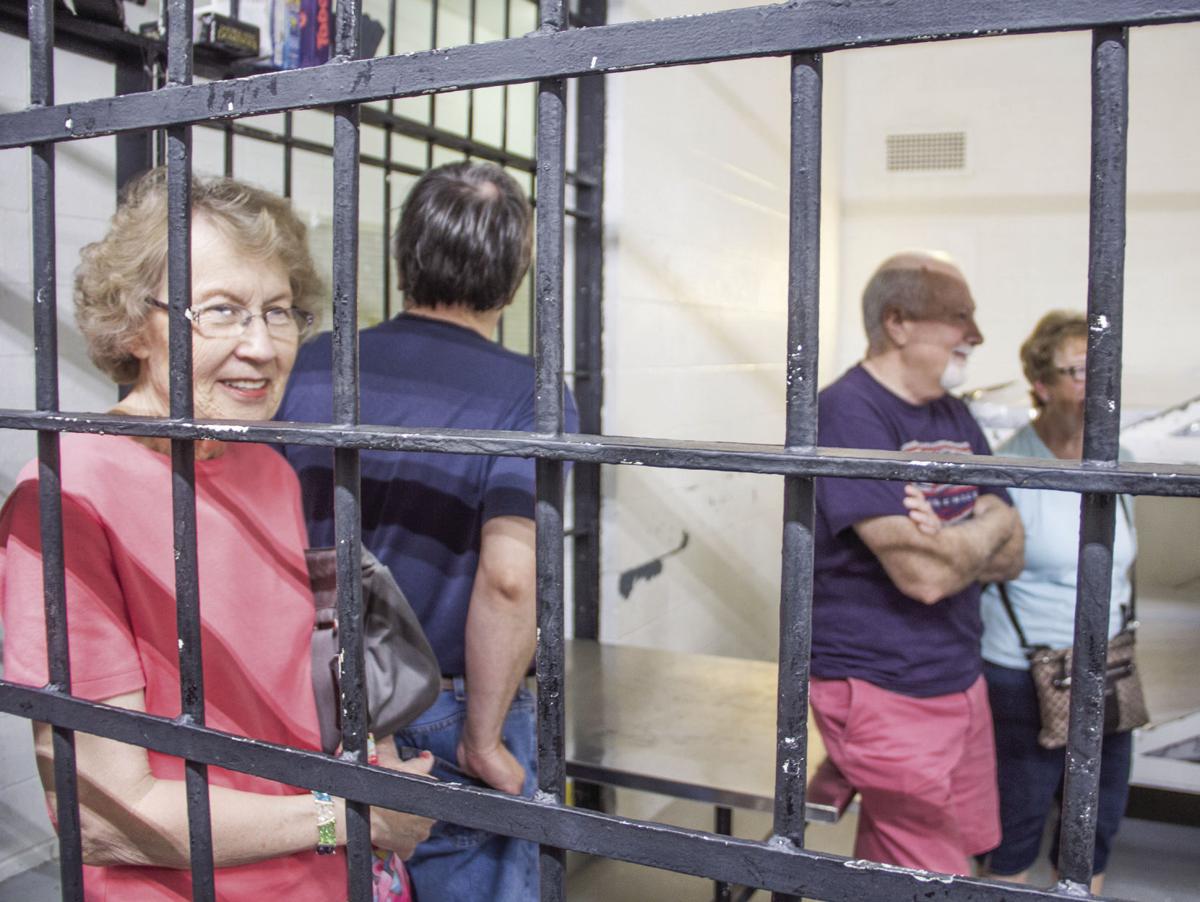 Eileen Robovsky, left, and about 100 other people toured the Jackson County Jail during open houses June 27 and July 6 in Maquoketa. The tours provided attendees with a look at the size and condition of the facility ahead of a $6.495 million bond referendum vote to approve funds to build a new jail and sheriff’s office Aug. 6. 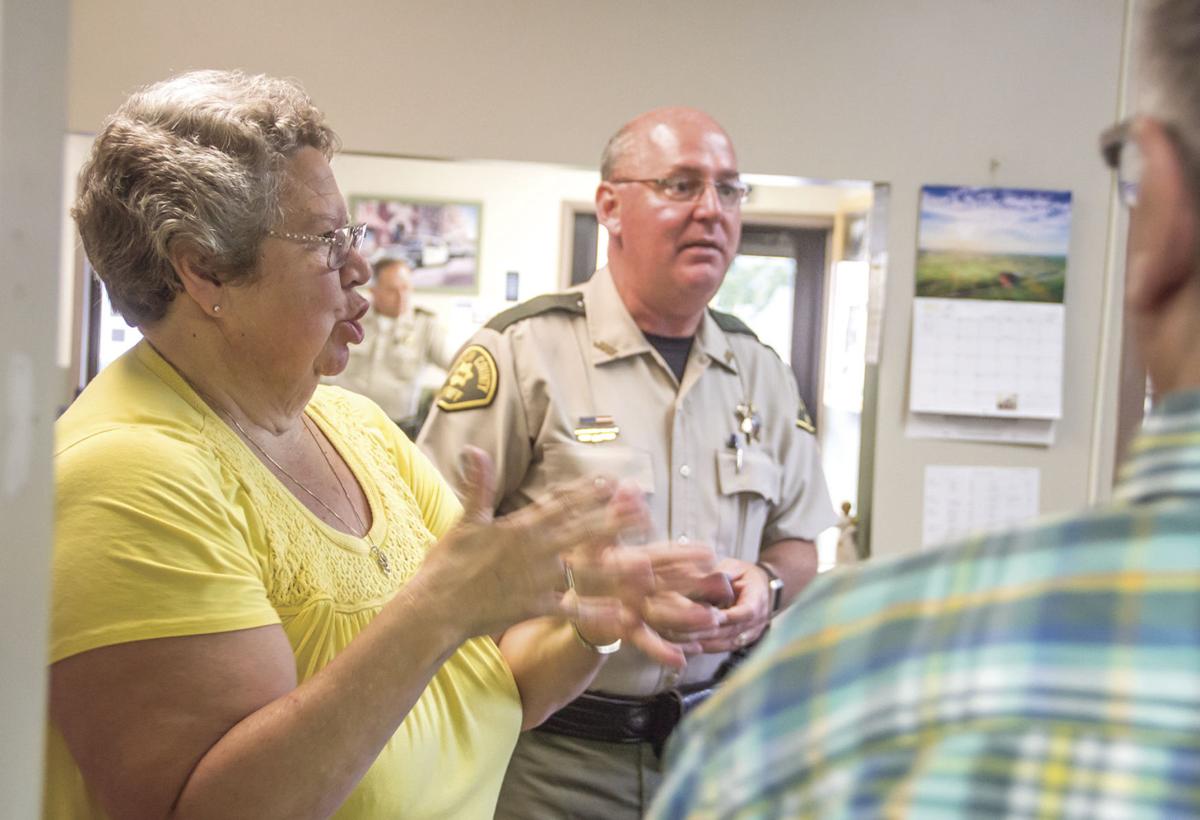 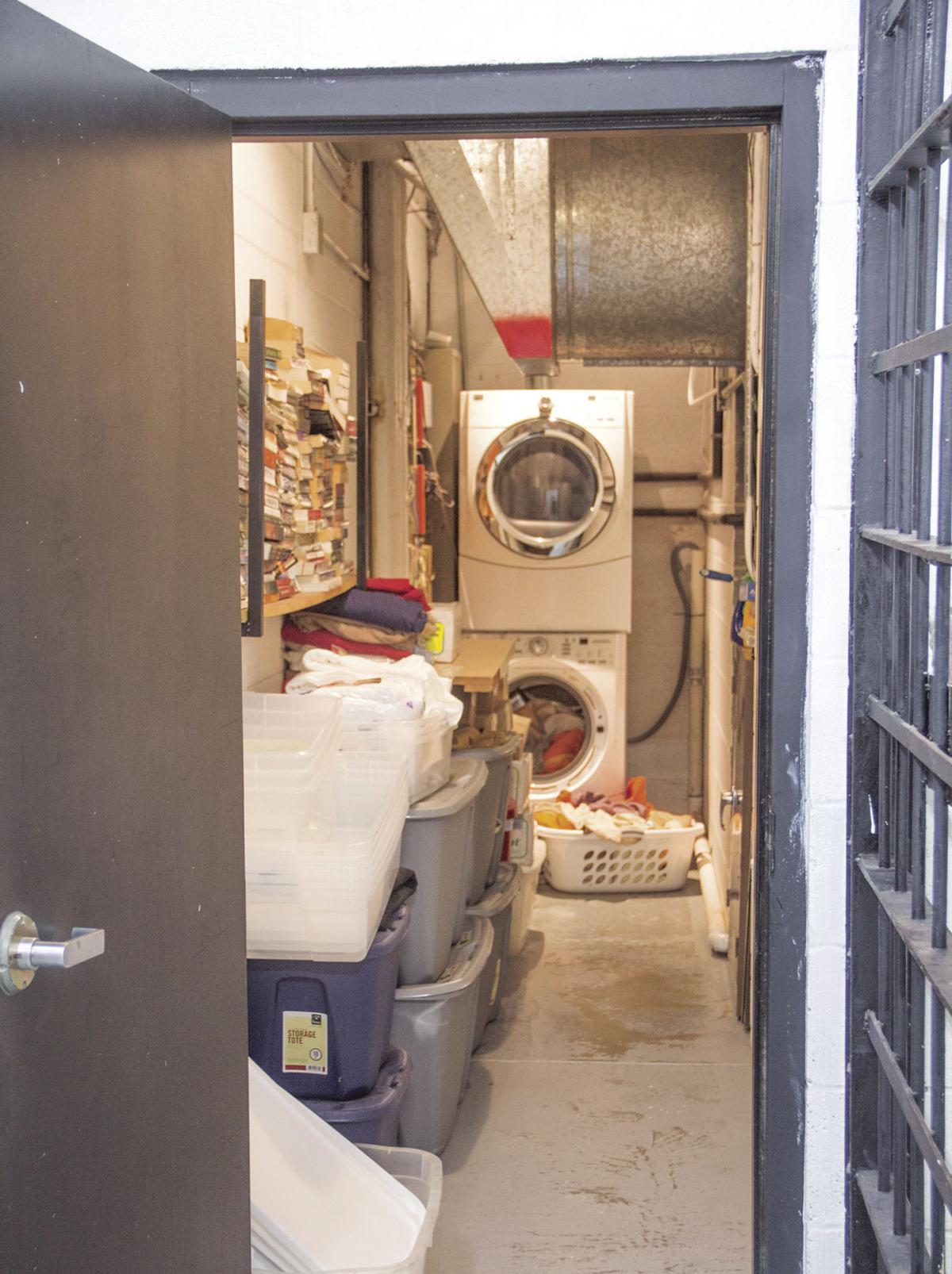 One jail doors opens into a cramped room piled with totes, cleaning supplies, laundry, and a stacked washer and dryer.

Eileen Robovsky, left, and about 100 other people toured the Jackson County Jail during open houses June 27 and July 6 in Maquoketa. The tours provided attendees with a look at the size and condition of the facility ahead of a $6.495 million bond referendum vote to approve funds to build a new jail and sheriff’s office Aug. 6.

One jail doors opens into a cramped room piled with totes, cleaning supplies, laundry, and a stacked washer and dryer.

It’s difficult to fit 10 people on a tour through the Jackson County Jail. The space is nothing if not cramped, with hallways so narrow you can touch the walls with outstretched elbows.

None of the prisoners in the cell block wants the bunk that is only about a foot away from the toilet on the other side of the doorless wall, jail officials said. Just outside the cell block, a restraining chair is tucked behind the open door to the Pepto-Bismol-pink solitary confinement cell.

Records are stored in totes under desks in the booking area, and a whiff of marijuana leaks out through the evidence locker in the squad room. On a humid July day, the facility is hot and muggy, and even with fans, smells linger and the air feels stagnant.

Karl Lechtenberg of Bettendorf toured the jail July 6. He said he’s been watching the jail issue closely because his mother lives near the current jail in Maquoketa.

Shirley Edwards Hampton, formerly of Maquoketa, is president of the Iowa Association of the Deaf. She also attended a Saturday morning tour.

“What access would there be for people there who don’t have their hearing?” she wondered of the proposed facility.

More than 100 total people toured the jail July 6 and June 27. These tours are part of a campaign in preparation for an Aug. 6 bond referendum that would fund a jail and sheriff’s office about five times as large as the current facility.

In last year’s vote, more than 52 percent of voters cast “yes” votes for a new jail. In a frustrated meeting after the bond vote last year, some Jackson County Jail Advisory Board members blamed a last-minute Farm Bureau letter that questioned the tax impacts of the project.

On July 9, John Hansen, the construction manager for this year’s proposed jail design, addressed Farm Bureau members, some of whom asked questions about the number of beds in the proposed facility and the operational costs if more prisoners are housed there.

Former county auditor Brian Moore said he was skeptical of Hansen’s projections that a new facility would cost about $13 million over 20 years, compared to about $20 million if the jail closed and all prisoners had to be transported and jailed out-of-county.

Moore argued that a larger inmate population would require more staff, which would increase operational costs over time.

The jail brought on two full-time and two part-time jailers July 1. Hansen said the proposed jail is designed to be run by two people per shift, with one monitoring from the control room and the other available for other tasks, such as laundry, meal prep, and patrols of the area.

Until recently, the current Jackson County jail had operated with just one jailer per shift, a greater safety risk when jailers were tending to inmate needs, jail officials said.

The proposed jail would allow prisoners to be separated in 11 different ways. If expanded to full capacity, it would include almost twice as many beds as the previous proposal.

“I don’t think we need this many beds,” said Ryan Kilburg, who represents the Farm Bureau on the jail advisory committee. “I do think we need that many classifications.”

Construction manager Hansen said the mezzanine expansion allows the county to build significantly more beds without adding much more cost. The cost per bed under the new proposal is almost half that of the previous proposal.

Scott County has more inmates than jail beds, which could make more jail space a moneymaker for Jackson County. However, Scott County is already starting to discuss its expansion needs.

The state could close the current Jackson County Jail, although chief inspector Delbert Longley had previously indicated he is unlikely to do so unless there is an emergency or unless movement toward a new jail stalls. If the jail closed, the county would have to pay other counties to house their inmates and transport those inmates back and forth to Jackson County.

At a jail advisory committee meeting the day after the Farm Bureau presentation, committee members discussed their educational campaign, which included sending a mailer to all Jackson County households. Members plan to have a presence at the Jackson County Fair as well.

In addition, a new Political Action Committee (PAC) will be able to campaign explicitly in favor of the bond’s passage. The “Vote Yes for the Jail” committee has $5,000 for marketing, including yard signs and advertisements. The county cannot spend taxpayer dollars on such a marketing campaign.