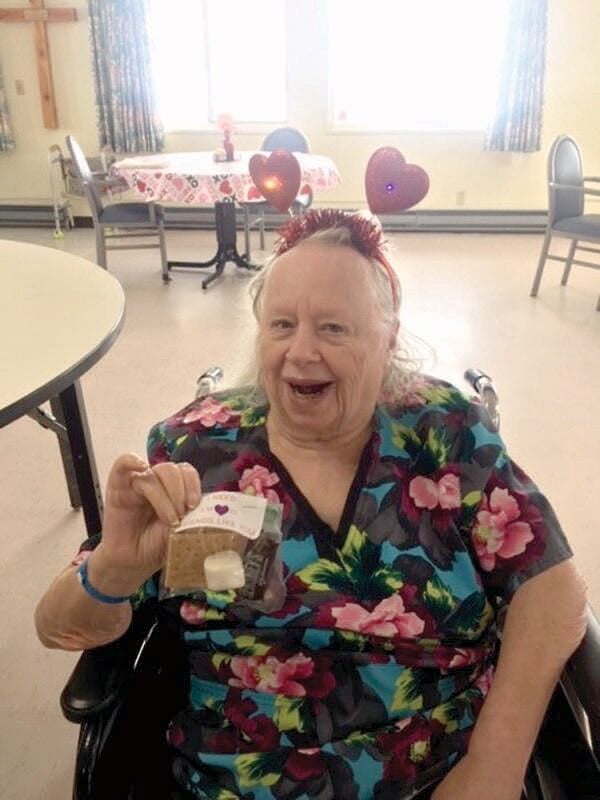 Marcia H. shows off her Valentine’s s'mores that she helped to make at Crestridge last week. 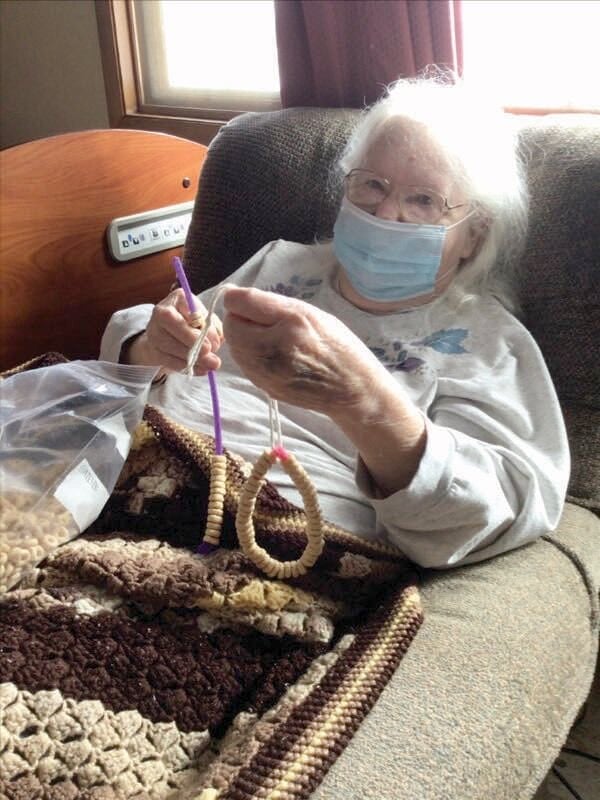 Maquoketa Care Center resident Vernelda “Toots” R. had a lot of fun making this environmentally friendly Cheerio bird feeder. She loves checking it daily to watch the community birds enjoying these tasty creations outside the windows.

Marcia H. shows off her Valentine’s s'mores that she helped to make at Crestridge last week.

Maquoketa Care Center resident Vernelda “Toots” R. had a lot of fun making this environmentally friendly Cheerio bird feeder. She loves checking it daily to watch the community birds enjoying these tasty creations outside the windows.

Tessa visited with the residents on Sunday about the birthday of Laura Ingalls Wilder. “Little House on the Prairie” is a favorite television show for the residents to watch.

Independent activities were done throughout the day. Family and friends made contact with their loved ones via the telephone and virtual visits. It was a nice start to a cold week!

On Monday morning Current Events were offered room-to-room. The weather was a big topic of conversation, and residents were not happy to see the new snow! The bird feeders were filled and the corn was put out so the residents could enjoy watching the animals throughout the day. Virtual visits were offered throughout the day on the iPad. Several residents played Radio Bingo in the afternoon with KMAQ. No winners yet, but we will keep trying!

On Tuesday morning the residents visited with Cathy and learned it was National Pizza Day. Kitchen staff provided delicious sausage pizza for lunch; the residents enjoyed it very much. Several residents watched “The Price is Right” and other game shows in the morning.

The iPad was offered for virtual visits and education as the residents learned it was also National Toothache Day. No one understood why anyone would celebrate a toothache, but the holiday was named to remind people how important dental care is. The residents were encouraged to take the day to educate themselves on toothaches and how to prevent one from occurring. Radio Bingo was played again by a few of the residents later in the afternoon.

On Wednesday morning the Catholic residents were offered the rosary prayer. In the afternoon, the residents learned about Jell-o Week and the history of Jell-o.

One-on-one Crossword Fun was offered to many residents and Radio Bingo was played later in the afternoon.

On Thursday morning the residents were able to watch worship services virtually. The rosary was prayed again with some of our Catholic residents.

In the afternoon we had a FaceTime visit with our volunteer Linda. Popcorn was popped and passed for Popcorn Thursday. Radio Bingo was played later in the day. We all love our bingo!

On Friday the residents received manicures and hand lotion massages if they wanted one.

After lunch the residents learned about the Chinese New Year and opened fortune cookies to read their fortunes.

The residents loved the hot cocoa that was served for Rolling Happy Hour. The residents played Radio Bingo later in the afternoon.

On Saturday the residents enjoyed one-on-one fun and independent activities throughout the day. Lawrence Welk was played on televisions in the evening.

We are still following the guidelines provided to us for consideration of re-opening. Jackson County remains in the Red Zone with 11.2% positivity rate based on most recent CMS county data posted Feb. 3. Any changes in our visitor policy will be announced as soon as we have them and our county remains safely below 10% for at least 14 days. Thank you all for understanding. Please stay safe!

Sunday kicked off our week with resident’s choice.

The ladies had a manicure day on Monday at 10 a.m. Rice Krispie treats were handed out at 2 p.m.

Tuesday morning book club was held at 10 a.m. in each unit. That afternoon Bingo was held with a drawing for a candy bar.

Wednesday worship was held at 10 a.m. in each unit. The residents enjoyed singing to their favorite hymns.

Wednesday afternoon the residents enjoyed finding their Valentine with a clue. We made indoor smores that were donated by Karlynn McDonald. Karlynn made each of the resident’s baggies with everything needed to make the yummy treat.

On Friday we started out our morning with exercise at 10 a.m. The residents voted for their King and Queen throughout the afternoon. We can’t wait until Monday for our votes to be counted. We also enjoyed cookies donated by Jill Wagner. Residents and staff enjoyed the treat on the day they were here to give us our vaccination.

The residents miss you all. They send their love and hope to see you soon. Be safe. On to next week’s adventures.